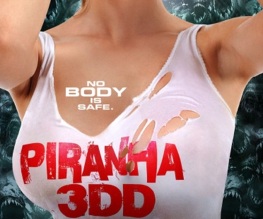 After months of delays, potentially being banished straight to DVD and generally all the drama you can run across unless you’re being eaten by a prehistoric killer fish, Piranha 3DD is finally in cinemas. You’re well advised to leave it there; a handful of decent cameos and rather more than a handful of suntanned breast don’t even come close to redeeming this predictable, uninspired garbage. I’m not even going to say it’s a bit of a fishy affair, because that would literally be funnier than anything in the film itself. One year on from the events of Piranha 3D, the once-bustling resort of Lake Victoria is a quarantined ghostland littered with skeletons. “Could it happen again?”, asks Newsreader. Yes, Newsreader, it could. After all, it’s summer once more and the stars are aligning – soon the allure of splashing about in the sun will draw together enough tits and twits to set off the whole grisly business once more. Not before Gary Busey’s been chewed to death by baby piranha that swim out of a dead cow’s anus shortly before said cow explodes, though – that’d be silly. THIS ACTUALLY HAPPENS. The piranhas are back, and two million years of living in an underground lake has somehow prepared them to follow the smell of chlorine until they find some teenagers to eat.

An unspecified distance away, marine biology student Maddy (Panabaker) returns from college to find her unscrupulous stepfather Chet (Koechner) has made some changes to the family business. Maddy’s mum left Chet a controlling stake in the family water park (because that’s totally a thing that families have), and he’s promptly turned it into some sort of colossal semen-trap full of naked Russian girls and cameras hidden in the pool ladders. “See that wide-screen TV over there? Check out the CoochCam!” he slobbers, as a vulva is waved at the screen for literally no reason. Maddy can’t pretend to approve, but her hands are tied so she just gets on with trying to make The Big Wet’s reopening a great success. Nothing will go wrong – David Hasselhoff’s coming, after all! – but then the piranhas turn up and almost everybody dies. Cue credits. I can still remember the childlike, slightly nauseated glee elicited by Piranha 3D. Alexandre Aja’s slick, knowing horror poked fun at everything from Jaws to Mega Shark vs Giant Octopus whilst still managing to be genuinely scary, constructing a delicate confection of guileless thrills, intelligent humour and nipples which was justly well-received by critics. Piranha 3DD is the pilot fish to Piranha 3D‘s Great White, barely worthy of nibbling the ectoparasites from under its fins. Virtually untried director John Gulager, whose greatest achievement to date has been the Feast trilogy (us neither), approaches the knotty business of filming with all the care and attention of a hyperactive child being drowned in Willy Wonka’s sugary diabetic piss – the camerawork is hackneyed, the script can be predicted a comfortable six lines in advance and the pacing is all over the place. This is the sort of thing that a team of laboratory beagles might make if you gave them forty million dollars and sorted out all their crippling addictions.

There are watchable moments, thank Christ. Ving Rhames’ brief and senseless cameo as the gruff policeman he played in the last film (now with added handicap!) has a couple of beautiful lines, my favourite of which was his gruff rejoinder to the therapist who asked how he got a shotgun attached to one of his prosthetic legs. “With the money I saved on socks”, growls Rhames, sounding for all the world as if he’s about to summon a couple of “hard, pipe-hittin’ niggers… with a pair of pliers and a blowtorch”. Christopher Lloyd, whose daffy icthyologist character has become obsessed with a) the possibility that the piranhas might evolve legs and b) getting more YouTube hits than Laughing Diarrhoea Baby, is also great in the minute or so he gets onscreen, but the stand-out performance comes from a twisted, distinctly Extras-inspired David Hasselhoff as himself. “Welcome to rock bottom”, the Hoff mutters, shortly before repeatedly slagging off a small child who later dies horribly. It almost goes without saying that absolutely none of the main cast have even a modicum of talent. The main girl doesn’t even have big tits. I mean, what are we even here for? Piranha 3DD was never realistically likely to match the financial or critical success of its predecessor; I just don’t think anyone really expected it to be this bad. That doesn’t stop the endlessly optimistic Gulager setting up the plot of the threequel in the last few minutes, of course (FYI, the plot of the threequel is basically The Host with more bikinis and fewer screaming Koreans), but even if Gulager himself is allowed to make another film it definitely won’t be Piranha 33DD3DD33D or whatever. If, and only if, James Cameron can’t be persuaded to remake Piranha II: The Spawning, I really think it’s time to throw this contrived monster of a franchise back into the ocean.

Previous: First poster for Sin City: A Dame To Kill For
Next: Dark Shadows