Get Him To The Greek Review 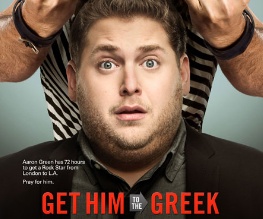 Supporting characters can make a film. James Bond wouldn’t have his licence to thrill without diabolical villains Jaws and Oddjob or alluring sex kittens Honey Ryder and Pussy Galore. Darth Vader’s heavy breathing booms across the Star Wars universe and Batman would be little more than a bored billionaire in a fancy dress without the demented Joker. However, these characters linger on the periphery for a reason: we love their eccentricities in small, concentrated doses. Not understanding this fundemental is where Get Him To The Greek falls down.

After years of dizzying success, Aldous releases the album African Child, which is lambasted by critics. One deems it the third worst thing to happen to Africa after war and famine. Soon after, the singer breaks up with girlfriend Maggie Q (Rose Byrne) and falls into disrepute in London. During a pitch meeting with crazed record company supremo Sergio (Sean Combs), underling Aaron Green (Aaron Hill) hits upon the brilliant idea of a 10th anniversary comeback concert to celebrate Snow’s most famous live outing at the legendary Greek Theater in Los Angeles. Despite initial reservations, Sergio eventually agrees and issues his minion with an ultimatum: “From the moment you touch down, you have 72 hours to get Aldous Snow to the Greek.” Unfortunately, Aldous loves to party, leading to a series of debauched encounters that jeopardise Aaron’s relationship with his girlfriend Daphne (Elisabeth Moss).

Get us to the point

Get Him To The Greek is a filthy-minded road movie pairing a sweet, lovable everyman with a swaggering lech, who asks for Aaron’s honest opinion of African Child and when he gets it, responds icily, “There’s a layer of respect, admittedly, for your truthfulness, but it’s peppered with hate.” Rapport between the leads is lukewarm, giving Combs the opportunity to scene steal as the bullish music maven with a large family to support. Writer-director Nicholas Stoller contrives some sporadically hilarious sequences including a hallucinogenic brawl at a Las Vegas casino, and the songs and music videos for Aldous and Jackie Q are a foul-mouthed delight. However, he also pads out the running time with dull interludes such as Aldous’ reunion with his father (Colm Meaney) and a threesome involving Daphne that leaves us feeling uncomfortable.

A party that outstays its welcome

It’s obvious that Russell Brand is in his element as his alter-ego (if it even is alter) Aldous Snow, and Jonah Hill is happy to continue in his one role as the bumbling fool. The problem is that it’s nothing we haven’t seen from them before, and after the first 20 minutes, it’s a routine that gets a bit old. Like the LP which takes the lustre off Aldous’s glittering career, Get Him To The Greek hits too many bum notes to stay on top.

What did you make of Get Him To the Greek?