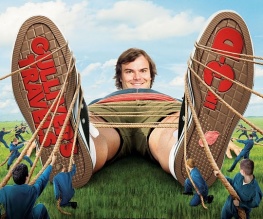 Lemuel Gulliver (Black) is a likeable guy who just doesn’t have the drive to be anything more than a slacker mail room clerk, nor the courage to ask out the girl (Peet) he really loves. When she gives him a shot at her heart and success, it takes him to the Bermuda Triangle where he is sucked down a plughole portal into the land of Lilliput, where for the first time in his life he gets to be the biggest guy in town. What follows this contrived set-up is a pretty lacklustre mix of fantasy adventure meets crazy comedy and it never truly gels together. Jack Black is strictly on PG rated auto-pilot. There are a few crude jokes for the teens on his behalf involving bum cracks and wee, and plenty of gags aimed at the little nippers in the audience, but nothing nearly as sharp or witty as you might have hoped for.

The considerable comic talents of Billy Connolly and Catherine Tate as the King and Queen of Lilliput are wasted in roles that give them nothing funny or particularly interesting to say or do – Connolly, in particular, looks like he’s given up on life. The majority of laughs come courtesy of Chris O’Dowd as General Edward, who is spot on playing a dutiful, arrogant berk and eventual villain (and, thankfully, gets enough screen time to compensate for the lack of laughs elsewhere). Together with Emily Blunt’s superb comic timing as Princess Mary, he saves much of the film.

At its heart, Gulliver’s Travels means well, and the message is a positive one for the kids to take home with them, but this winds up being an old fashioned culture clash comedy between American and British stereotypes. The image of the giant American man towering over the teeny weeny, simple British folk is brimming with rather too obvious subtext. Some of this could almost be considered satire if it wasn’t so apparent that director Rob Letterman (Monsters vs. Aliens) was clearly only thinking about the box office receipts. That much, in fact, is obvious when you see the painful amount of product placement shoehorned into the film, with entire moments and scenes dedicated to advertising Xbox 360s, iPhones and Coca-Cola. It may be done with some wit and invention, but it’s cynical merchandising all the same.

Come the predictable climax you feel as though everything has happened at the pace and in the way you expected it to with the notable exception of an abrupt musical number that comes from nowhere. It’s as if they didn’t know how to end the story so they just tacked on a random song and dance routine to tie-up the loose ends. Who knows, maybe it was in Black’s contract? He does sing in pretty much every film he’s in. Unfortunately for us, we get a full five minutes of it here.

The only consistent pleasure of this movie is the amazing special effects that seamlessly blend the giant Jack Black and the tiny townsfolk into shot after shot. The 3D element is take it or leave it, as it often is with movies these days. I personally could do without 3D being added to every single film just for the sake of it; when I took off the glasses and left the cinema, I couldn’t walk in a straight line for a few minutes. Imagine six year old kids hyped up on sugar and trying to find their balance outside in the foyer – that image alone is, alas, funnier than the entire film.

Previous: Howl
Next: Midgets Vs. Mascots