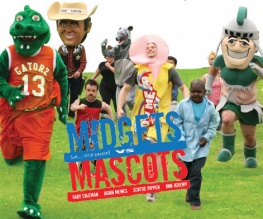 I still haven’t satisfactorily got to the bottom of what sort of film Midgets Vs. Mascots actually is. In fact, I’d go so far as to say that it’s not possible to describe it accurately using our currently accepted genre boundaries. That’s right, I said it – this is a film which transcends the otherwise steadfast conventions of contemporary cinema. And as if that wasn’t enough for what is essentially a perverted child of Jackass, the production is also alleged to have hastened the death of diminutive Diff’rent Strokes star Gary Coleman. Specifically, hastened it by causing him stress over the producers’ decision to include repeated full frontal nude shots of Coleman in the finished film. Yep. Just in case you need a pull quote, guys:

“Midgets vs. Mascots – the film that killed Gary Coleman with his own cock.”

In many ways, this is the cinematic event of the generation.

The adult entertainment world is in mourning at the news that legendary midget porn mogul and costumed mascot superstar Big Red (Richard Howland) has died, although his grasping son Little Richard (Hapka) and bimbo wife Bonnie (Powell) are more concerned about getting their share of his spectacular fortune. Unfortunately for them, it seems Big Red had rather a perverse sense of humour (well, you’d have to) – according to the terms of his will, $10m has been left to whichever beneficiary can successfully coach an unconventional team of Little People or costumed mascots through thirty frankly mental tasks within a month. Each task is competitive, the team which wins most tasks wins, each member of the winning team receives a million dollars and the coach gets the balance. Simple? No, not really.

You see, the tasks involve such varied challenges as ‘See who can get punched in the face after delivering the least number of insults‘, ‘Rope an alligator‘, ‘Play poker whilst being charged by an angry bull‘ and ‘Chug a gallon of milk (even if you’re a lactose-intolerant 4 foot midget lady)’. What follows is a spectacular catalogue of debasement as the midgets and mascots (all of whom initially thought they were competing for a paltry $1,000, which gives you an idea of their level of desperation) jump through increasingly obscene hoops in their bid to win the money and justify prostituting any remaining shreds of self-esteem to which they have managed to cling.

If this were simply a comedy film about midgets and mascots competing to win money, it would be unremittingly shit. To some extent, it still is. The humour is crude and spectacularly offensive, the stunts are frankly pitiful and the final payoff is the most nauseating end to a film since Rat Race. BUT. The pseudo-documentary style, which incorporates several types of camera and occasional fourth wall breaches, is very well executed, and whilst Big Red’s family borders on caricature the competitors themselves are just a little too close to reality to be comfortable. I can’t quite decide whether the Little People involved in the film have advanced or mocked their cause with their painfully honest performances, chief amongst which is categorically Gary Coleman (in what unexpectedly turned out to be his swansong). Relentlessly teased by the ‘talls’ and ostracised by the midgets who don’t see him as one of them, Coleman’s shamefaced admission that Diff’rent Strokes was a long time ago and a thousand dollars means more to him than once it did is truly painful viewing. Plus, you see a woman break wind whilst he’s administering awkward looking oral sex to her in a toilet cubicle – there really is something for everyone here.

Dripping with more bittersweet schadenfreude than This Is Spinal Tap, Midgets Vs. Mascots is undoubtedly the last word in mockumentary – by which I mean that future directors looking to approach this deformed subgenre will recognise that it definitively demonstrates what happens when the line between fiction and reality is too effectively blurred. If this were a little more real it would be a punishing documentary, and if it were a tad more fictional it would be a dreadful comedy; hovering as it does in a sort of no-man’s-land, it will not quite manage to attract the fans of either style.