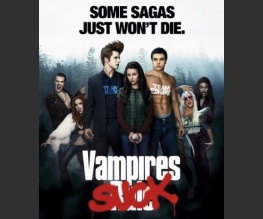 First writer-directors Jason Friedberg and Aaron Seltzer brought you the movie-genre parodies Scary Movie, Date Movie and Meet the Spartans. None of them were any good unless you were thirteen. Now they’ve unleashed Vampires Suck, a pastiche of the first two Twilight films. It’s hardly a newsflash, but we’ll save you a lot of time if we point out that Vampires Suck isn’t any good unless you’re thirteen.

If you’re thirteen, of course, it’s brilliant. Except for the boring bits – but you’ll tell your mates it was all brilliant, because that’s peer pressure for you.

Moody teenager Becca (ie. Twilight’s Bella) has a bunch of songs on her iPod divided into various angsty themes. She also has boy problems, and vampire problems, and werewolf problems as she moves to the town of Sporks to live with her father. Becca finds herself torn between two boys, Edward Sullen and, er, the other werewolf one. Several million vampire jokes later, everything comes to a head at the school prom.

We are not going to make a vampire joke here.

Vampires Suck is as subtle as its title, and it goes for the scattergun method of funnies – if the first nine don’t work on you, the tenth probably will. And, it has to be said, there is some charm to this movie – maybe not enough for a cinema ticket (if you’re over thirteen) but certainly enough for a lazyboy pizza and DVD night. The novel method of explaining a Twilight vampire‘s graceful speed is genuinely amusing in its visual slapstick, and there are highlight moments scattered here and there like the first spring crocus, the song and dance routine by the tribe of werewolves being one. Nevertheless, the real reason to watch this movie is Jenn Proske’s absolutely inspired mimicry of Kristen Stewart‘s quirks and mannerisms as Twilight’s Bella. It’s Proske’s cruel talent as an impressionist that carries the movie more than the subpar Airplane jokes ever could. She out-kristens Kristen. Ooh, verb that noun!

Or here. But if we did, it would be better than anything in Vampires Suck.

If you do decide to see Vampires Suck at the cinema, and you’re over thirteen, you’ll have yet another (guilty) treat bestowed on you absolutely gratis. Never mind the film, watch the audience. They’ll all be fifteen, tops. They’ll either be gaggles of girls, gaggles of squeaky/gruff-voiced boys (yes, really) or awkward tween couples. Watch their reactions to some of the more snide, almost-subtle jokes analysing and undermining the appeal of Bella and Edward’s courtship in Twilight. The resulting self-conscious embarrassment of the audience has to be experienced – and smiled at benignly – for oneself.

Previous: The Disappearance of Alice Creed
Next: The Blind Side