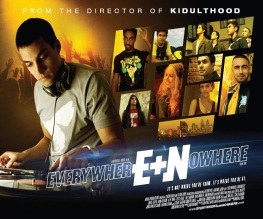 The film starts with Ash, (James Floyd), in his bedroom mixing and fantasising playing to a festival. Putting on a pair of shades with a field of people reflected in them he dances around for a bit. Cringe. Oh but it gets worse. He has a sister, (Shivani Ghai), who is studying law solely so she can live away from home with her non-Asian DJ boyfriend. Ash’s man-whore friend Jaz, (Elyes Gable), has decided to conform to his parents’ wishes and consents to an arranged marriage with an Asian girl. Riz, (Neet Mohan), has all of a sudden become very involved in his local mosque and concerned about halal meat so it only makes sense that he will turn all jihad on their asses… There is one friend who has a comfortable relationship with his father; Zaf’s, (Adam Decon), father is accepting of the ways of the younger generation and is a kind old man. But he is dying. Brilliant!

Nothing happens for the first half of the film. Nothing. They go on a night out and the DJ hears Ash’s mind bogglingly brilliant song instantly offering him a slot in the next nights line up, just like that. The next day is wrought with an emotional family related discovery and excessive amounts of cricket. All is looking up for our boy Ash until he is on his way to take advantage of his big break. His friends all desperately need him to be there for them resulting in him almost missing his slot, almost. Ash overcomes these seemingly insurmountable obstacles and plays his tune to the adoring crowd. Finally he is happy and in order to destroy that feeling he decides it’s a good idea to take his Swedish dancer girlfriend home to meet his devout Islamic parents (?!). Things do not go well (shocking) and Ash runs off into the sunset with his new found freedom. This has been done before with Bend it Like Beckham and East is East. Both of which were very good movies; funny and entertaining. But Everywhere and Nowhere just goes about it in the wrong way.

The group of twenty-something year old guys are two dimensional, they seem like a commercial boy band with the pretty one, the nerdy one, the rebel and the leader. Have these people socialised before writing the script, do they know what real humans are like? Then they should know that people only conform to these descriptions in badly written scripts… Ahem. To be fair, the acting is not bad but the actors are trapped in the confines of their script and therefore not much can be done to save them. Issues are brought up that are never mentioned again (for instance Riz’s little sister self-harming and Jamie’s pregnant girlfriend) which leaves you wondering if everybody in this clichéd universe is living in constant hell. As well as going out of their way to make the timing work like in a bad porno where everybody stands around awkwardly waiting for one guy to say “are your pipes broken?” or something as ridiculously stupid. The camera work is mediocre at best; far too shaky to watch when they are walking around. The lighting in the club is no better; it’s so dark you can’t see anything, you didn’t have to use an actual nightclub! The editing in the opening credits is just annoying; it looks like bright gashes in the film reel. Not cool, just a little bit too bright. They wanted an emotional drama but they took themselves far too seriously and came out with a movie that will be in the discounted DVD section for years to come. I was expecting more from the director of Kidulthood.

Previous: UK Film Events This May
Next: Something Borrowed