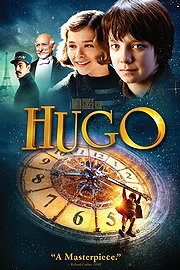 The most important thing I can say about Hugo is that, under no circumstances, is it to be considered a film for children. Instead, it is a children’s film for adults. Martin Scorsese considers the difference between what a youngster thinks they know and what is real, what they genuinely understand to be true and what they are prepared to admit. The joyful discovery of clues, of secrets and of mysteries versus the misery of keeping them hidden. Hugo explores a childhood we all wish that we had experienced for ourselves, having grown up devouring books by the likes of Enid Blyton, Arthur Conan Doyle and Lewis Carroll. It’s nostalgia… but in the best way possible.

In short, Hugo is a masterpiece.

Children have always been obsessed with mystery and, as adults, we carry a subdued version of this innocent wonder throughout our lives. Keys, for example, take on a far greater meaning; which door will it unlock and what unknown tableau will it expose? From clockwork and mechanics, to locks and their many possibilities, Scorsese carefully holds his camera up to all of these everyday objects and exposes their innate magical qualities.

The first shot depicts Paris as a constantly whirring clockwork mechanism. Deep within this contrivance awaits the city railstation, where a little orphan named Hugo (Asa Butterfield) secretly lives within the walls. Not only is he tasked with winding the station clocks everyday, but he is also hell-bent on repairing his late father’s (Jude Law) rusting automaton. All he needs to complete his project are a few more cogs, a key to fit the heart-shaped lock and a little bit of added brain-power. Cue Isabelle, a bookish young lady who longs to experience a real-life mystery like the ones she has read of in the storybooks. Together, the pair are a force to be reckoned with and, soon, it seems as if the automaton will finally be brought to life… but what secrets will it reveal? Scorsese manages to take one story and lead you into somewhere completely unexpected, delving into the fascinating history of BFF’s favourite art form along the way. The plot never drags; the story never loses momentum. From the very first few lines, we’re captivated by Hugo’s tale and the rapidly unraveling secrets it exposes. There’s none of that big-reveal-at-the-end business here. Instead we have plenty of little revelations and twists peppered throughout the script, which means that growing impatient or bored is never an option for the viewer. The cast is inspiring; Ben Kingsley and Sacha Baron Cohen attack their roles with aplomb, creating likable characters out of two of Hugo’s (initially) most fearsome acquaintances. And it doesn’t stop there; this is a film with almost as big an ensemble cast as the ill-fated New Year’s Eve. The only difference is that the stars of Hugo’s show are hugely talented; Jude Law, Christopher Lee, Ray Winstone, Helen McCrory, Richard Griffiths, Emily Mortimer AND Frances de la Tour? What did we do to deserve such a treat?! There’s none of that BIG STAR FOR THE SAKE OF IT atmosphere. We see de la Tour opening up her bakery, Griffiths bumbling towards her with a tentative smile, Mortimer setting up her flower stall and Lee wandering through the station with a book tucked under one arm. They are not actors, nor are they playing any particular role. Instead, they are the backdrop to Hugo’s personal story and the ones who catch his eye, briefly, as he navigates his way through the bustling crowds of the Parisian train station. Exactly as Scorsese had intended. Don’t worry, I haven’t forgotten Asa Butterfield and Chloë Grace Moretz. This mini actor and actress completely steal the show as Hugo and Isabelle, reminding us that children CAN be enchanting on screen without falling prey to over-anunciation and terribly frequent WIDE EYED FACIAL EXPRESSIONS! Ahem. Not that I’m comparing the child stars of Hugo to those of Harry Potter And The Philosopher’s Stone. Their on-screen chemistry is utterly believable, their performances are equably subtle and charming.

It may sound like a criticism, but some of the best moments of the film have been recycled from others. Filled to the brim with silent movie clips, audiences can experience the magic of Safety Last! and A Trip to the Moon. We even get to see the Lumière brothers’ 50 second film of a train pulling into a railway station (and the fear it inspired in audiences who had never before seen a moving picture!). Making movies is like making magic, Scorsese seems to say, and, like magic, it can inspire all sorts of emotions within us. It’s enough to make you want to dig through the black and white selection at your nearest DVD store, isn’t it? Explore 1930s Paris and the world of cinema through the eyes of a child who bases his existence on the idea of anonymity and whaddaya get? Suspense! Eccentricity! Magic! Intrigue! It’s the sort of childhood we each have craved and, in some small way, each have experienced; whether it was a simple case of mending something that was broken, or by running so fast we fell down, or simply making a new friend, Hugo encapsulates the true beauty of the age of innocence.