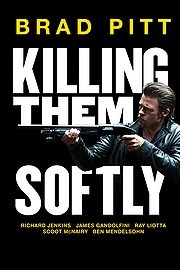 Killing Them Softly is by no means a bad film. However, when half-way through the screening several people walked out we weren’t surprised. The team responsible for the marketing of this film seriously dropped the ball. If you are expecting a loud gangster flick with lots of sequences showing Brad Pitt looking hot and menacing you are in for a surprise. Killing Them Softly isn’t so much a gangster flick, as political satire pretending to be a gangster flick and scenes of hard hitting action are few and far between. The film takes a novel approach to an often discussed topic but the problem here is the constant allusion to American politics and critique on capitalism is hilariously unsubtle and gels uneasily with the sombre tone of the film.

The film’s opening shot inter-splices soundbites of Barack Obama’s 2008 Democratic National Convention speech with shots of disheveled two-bit hustler Frankie (Mcnairy) shuffling along the barren wasteland of downtown New Orleans. Director Andrew Dominik makes use of this kind of juxtaposition throughout the majority of the film with varying results. American flags hanging from the dilapidated apartment blocks and constant radio and television streams of Obama and McCain battling it out are a constant presence throughout the film. As far as the subtext goes – politicians are as corrupt as the gangsters they condemn etc. etc. – we’ve seen it done before and done better. Killing Them Softly sets this point up at the beginning and then labours it for the rest of the film, taking close to two hours to make the same point made in one episode of The Wire. There are moments that cleverly parallel mainstream politics with the surprisingly bureaucratic world of hit-men and unlicensed poker playing and viewers will no doubt find these sequences extremely entertaining. However, viewers may also tire of the dialogue to action ratio which is a little off at times.

The plot revolves around Frankie’s ill fated decision to stick up a series of mob controlled poker games run by gangster Markie Trattman (Liotta). Professional enforcer Jackie Cogan (Pitt) is brought in to locate the criminals responsible for the heist and mete out an appropriate punishment. The strengths and weaknesses of this film are two sides of the same coin. Dominik expertly allows the plot to unfold with languid ease and there is no danger of the many plot developments going over the audience’s heads. The problem lies in the editing. Of the many monologue-heavy sequences that feature in this film there is not one of them that wouldn’t have benefitted from having a few minutes shaved off. Exquisite scenes, such as the long close up of hit-man Mickey (Gandolfini) as he bemoans the effect his work has had on his relationship with his wife, lose a lot of their emotional potency, simply because they are far too long. 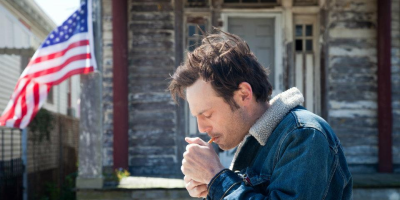 For a film seeming to attach itself to the action genre, it is surprisingly static. Still, character-driven scenes, more suited for a highbrow theatre play, run continuously in between strangely beautiful scenes of prolonged violence leaving many in the audience feeling unsettled by this odd combination. A few weeks ago, we reviewed Korean film My Way, where the level of dramatic tension was sustained to such an extent that it became numbing. Here, the opposite is true. Sequences that hint at violence and action never quite deliver and we left the theatre marvelling at how little actually happened. However, when we later found out that Dominik also directed The Assassination Of Jesse James by The Coward Robert Ford, everything made sense. The tone and pacing of Killing Them Softly is very in keeping with his directorial style so far and fans who appreciated his other offerings are sure to love this. 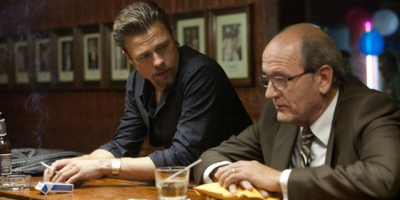 The acting is arguably the biggest draw of this flick. Scoot Mcnairy is wonderfully cast alongside Australian actor Ben Mendelsohn, with much of the laughs being derived from their scenes. James Gandolfini had the potential to be great but his character is dealt with poorly. Brad Pitt is nicely understated here and displaying none of the usual wooden quirks that make his performances so conspicuos, and we wouldn’t be surprised if he gets an Oscar nod for this one. An honourable mention must be made of Ray Liotta’s performance; he did a lot with the little dialogue he was given and reminded us why we loved him in Goodfellas. Unfortunately, the stong performances are not quite enough to tip this film from just above average to brilliant. Andrew Dominik is showing promise and we applaud him for his established style, but he needs a few more years to hone his craft.

Previous: Dumb And Dumber To to Happen
Next: Orange(Wednesday)s and Lemons #88