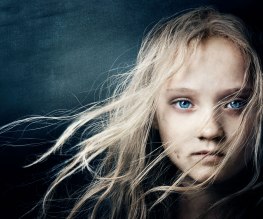 If you haven’t seen Les Misérables yet, you probably feel like you have. What with Anne Hathaway greedily grabbing gongs at every awards ceremony she can – not to mention Hugh Jackman’s sad little face peering out at you from movie posters everywhere – the musical is pretty much on the tip of everyone’s tongue. But why?

First things first, let’s talk plot. Based on a musical based on the novel by Victor Hugo (phew!), the film begins with Russell Crowe – sporting some rather extravagantly shiny buttons – staring at a massive warship being pulled into dock. However, in Les Misérables, Russell is neither Master nor Commander; in fact, he’s a rather unforgiving jailer named Javert. And he has an extra-special dose of hatred stored up for prisoner Jean Valjean (Jackman), who has been paroled after many years of hard labour for the crime of stealing bread to feed a starving child. The bastard.

After robbing a priest of all his silver (old habits die hard), Jean turns his life around and promises to do only good things. Which is how he becomes the mayor of a town and the loving guardian of orphan Cosette (Isabelle Allen / Amanda Seyfried), illegitimate daughter of toothless, hairless and unenthusiastic prostitute Fantine (Hathaway). Throw in an ill-planned Parisian Revolution, more poverty-stricken peasants than you can throw a loaf of bread at, a serious case of unrequited love and a jailor hellbent on revenge and you have, pretty much, the makings of Les Misérables. Which is, as you may have guessed from the title, one of the most depressing films ever made. 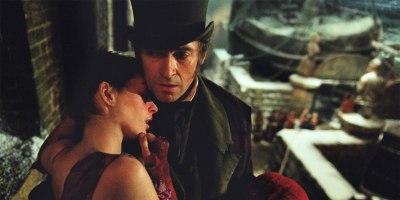 Now onto the music. It’s no secret by now that director Tom Hooper was VERY into the idea of making his movie feel as immediate as possible (hence why he had Anne Hathaway hack off her hair live on camera), but his decision to record his cast singing live was definitely a masterstroke. From Anne Hathaway’s extreme close up of I Dreamed A Dream (you can see every single speck of her tonsils!) to Samantha Barks, recruited from the stageshow to play Eponine, in her mournful lament, each and every song feels infinitely more emotional than any pre-recorded and smoothed out version ever could. Every single bumpy note, every warble or emotion, every strenuous attempt to lift the rafters is right there for the audience to be a part of – which means that the usually slightly disorientating effect of EVERY SINGLE LINE being sung (yup, this is a serious musical – I’m looking at YOU Mamma Mia!) doesn’t cause events seem to feel too lifted from reality.

There’s no denying that Les Misérables is truly a film gunning for an Oscar. It’s got the period costumes, it’s got the epic cinematography, it’s got the “oh my goodness, look at all those dead and bloodied bodies” battle scene, it’s got the ‘quirk’ every big film needs to help it standout from the crowd (this time round, it’s the singing) AND it’s wildly, horribly depressing. Children get gunned down in the street, Anne Hathaway gets her teeth ripped from her gums and Amanda Seyfriend… well. Well, she falls in love with Eddie Redmayne after spotting him in the square and has an over-protective (if wealthy) father, the lucky bitch. 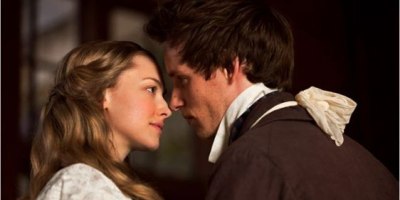 In all seriousness, if there’s one thing we know about depression, it’s that it wins big at the awards ceremonies. Think Schindler’s List (war profiteer turns Good Samaritan in the face of the impending Holocaust – 7 Oscars). Think Amadeus (Salieri cuts his own throat and Mozart goes mad – 8 Oscars). Think… think Titanic (boat sinks – 11 Oscars), if it’s really the best you can do. Why do the weepies always score so high? Because it’s harder to touch on our emotions and tug on our tearducts than it is to tickle our funnybones. Human emotions are complex, despite what shows like the X Factor might suggest, and it takes a rare film that can adeptly manipulate them to suit their plot. And Les Misérables, with so many convoluted stories and layers to work through during the two and a half hours of screentime, has something for everyone to shed a tear for – no matter who they are. There was no singular chorus of sniffles during my screening at any one moment; instead, you heard tears being shed throughout and across the audience, each person letting themselves be affected by a different point in the story. And that’s seriously impressive.

But don’t despair; there’s also light relief in in the hilarious and grotesque shape of Sacha Baron Cohen and Helena Bonham Carter, who give an outstanding double turn as the conniving, thieving M and Mme Thenardier. Whenever the going gets seriously rough, you can count on these two to make an appearance with an ever-so-catchy jingle and a well-pitched joke or two about courgettes; in all honesty, I’d never expected Borat and Bellatrix to make such an extraordinarily adept tag-team. Fingers crossed they work together again in the near future. 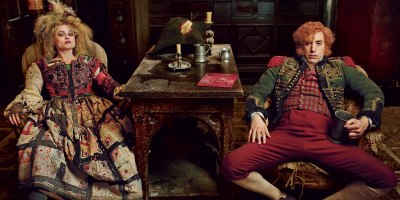 Across the board, in fact, the cast is fantastic – although Russell Crowe, for some reason, is being picked on for the critics. Sure, he wasn’t quite as natural a crooner as Eddie Redmayne or Hugh Jackman, but he was hardly awful. And, while not a powerhouse vocalist like Anne Hathaway, his sheer presence and brutish physique definitely made an intriguing foil to Jean Valjean’s character. He was the Snape to Jackman’s Harry Potter, as it were; a flawed anti-hero desperately trying to reconcile the concepts of morality and duty. And he had, as I’ve already mentioned, wonderfully shiny buttons. Not to mention some pretty awesome hats. So maybe we should all back off a little bit and cut Russell some slack, ok?

In short, the film is a definite must-see and a strong contender for Best Picture at the Academy Awards (where it’s picked up eight nominations) – we’re not even going to bother discussing Anne Hathaway’s almost guaranteed Best Supporting Actress win. The cinematography is gorgeous, the costumes are beautiful, the beards are jawdroppingly hairy, the music is utterly mesmerising and the cast have truly given every fibre of their being to make this production spectacular. However – and it’s a fairly big however – it’s a meaty movie and should only be attempted the once. Trust us. You wouldn’t chow down on a 48oz steak every day of the week, would you?

Previous: Pirates of the Caribbean 5 bags writer
Next: Disney on announcement rampage