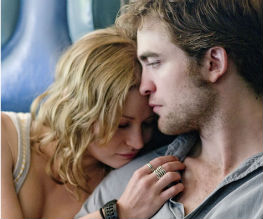 Sad boy meets sad girl. Said sad boy and sad girl inevitably fall in love. Whilst it would be easy to summarise Remember Me as such, it would be crude to reduce R Patz’ latest venture to such terms. Remember Me is a dark, brooding, and occasionally heart-wrenching affair (yes, really), but unfortunately this new Robert Pattinson film fails to reach its potential.

As mentioned above, the plot of this film doesn’t really break any new ground. Pattinson, who also did some behind-the-camera work on Remember Me,  plays Tyler, a moody and contemplative New York student struggling to erase the memory of his brother’s suicide. Egged on by his irritatingly Jack-the-Lad roommate Aidan (Tate Ellington), Tyler engages Ally (Emilie de Ravin), a fellow student who just so happens to have witnessed the murder of her mother. As a six-year-old. Oh, and Tyler only introduces himself to Ally in order to get back at her father Neil (Craig Cooper), an NYPD detective who inflicted a good ol’ fashioned dose of police brutality upon Tyler. Jeez.