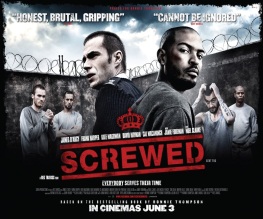 Another gritty output from the world of British cinema comes in the form of Reg Traviss’ Screwed. Based on the book by prison officer turned author Ronnie Thompson, Screwed follows Sam Norwood as he comes home from Afghanistan only to be faced with the difficulty of looking after a young family while having no experience or skills. He is forced to take a job as a prison officer, which he deems to be the same as the army – just with a different uniform. Clearly shell shocked after his experiences, the violent environment into which he is thrust starts to send him over the edge.

Once he is settled in his new job, Sam takes to going out with the boys to seedy strip-clubs (one of the only instances of women in this film aside from Sam’s wife and one female prison officer – just saying) every night. He drinks too much and indulges in a spot of drug taking at pretty much every available opportunity. He soon becomes aware of the corrupt underbelly of his workplace, making his life much more difficult. Sam, despite being in the process of coming apart at the seams, is the only man with the decency to expose his fellow officers’ misdeeds.

James D’Arcy’s performance as Sam Norwood is fantastic; he looks physically ill when it all seems to be getting too much for him yet he does not milk the tears or desperation at any stage, acting as you would expect a man in that situation to react. Frank Harper takes on the role of Deno with such ease that I think he would be able to slip into a prison, walk around for a while and nobody would bat an eyelid. Noel Clarke is another worth noting as the prison’s top dog Truman. His cruel menacing presence is a change from the malevolent criminal bosses we are used to seeing – he is calm, cool and collected using his wits to stay in power and only reverting to violence when it is needed. The violence is graphic but realistic, whilst the weapons the inmates use are realistic prison shivs fashioned from toothbrushes and razorblades, with perhaps a little molten sugar thrown at people’s faces for variety *shudder*. The prison itself, looks like it was built during the Victorian era with dank crumbling walls and overly-echoey hallways, is a wonderful deviation from the shiny new prisons we are presented with in American cinema. The echo is used brilliantly as a means of showing how Sam’s mind wanders from the present to his time in Afghanistan as well as simply adding to the creepy factor.

The plot of Screwed may be overly convoluted at times but the realism of the story rings terrifyingly true. The credit for this must be laid upon Ronnie Thompson, for the ability to capture his time spent in prisons and put it on paper, and Reg Traviss, for his ability to transfer this story onto the screen while keeping all the filth of the original format.