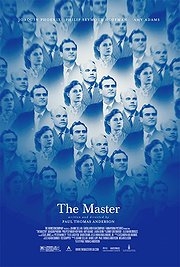 At this morning’s much-vaunted 70mm press screening of The Master, the film was played out of frame. Then it was dragged into frame, but there was no sound. Then there was sound, but it was out of sync. Then the house lights came up and a little man came down the front to apologise and tell us that we’d be seeing a digital version of the first feature to be shot in 70mm film for decades. The dysfunctional set-up and consequent alienation of this charade might seem like the perfect setting for Paul Thomas Anderson’s latest, but ultimately it was the anticipation, confusion and slight disappointment of the projection cock-up that really encapsulated this good-but-not-quite-good-enough film.

Five years after the end of WWII, former seaman Freddie Quell (Phoenix) is struggling to find his place in an America which is equally full of a) opportunities for hard-working former servicemen and b) employers who aren’t interested in post-traumatic compulsive masturbators who make their own booze out of torpedo fuel. Drifting from job to job and state to state, constantly on the run from whatever disaster has most recently befallen him, Freddie is a shambolic wreck with no friends, no family and no place to go. That is, until, he sneaks onboard a fairy-lit ship and meets his new Master.

Lancaster Dodd (Hoffman) describes himself as “a writer, a doctor, a nuclear physicist, a theoretical philosopher, but above all a man”. A charismatic, moustachioed charmer with an easy laugh and a small coterie of devoted followers, Dodd is the leader of a cult philosophical movement which promises to cure illnesses and banish negative emotion through a sort of souped-up past life regression therapy. Convinced that he knew Freddie in a previous incarnation (and more than a little fond of his back-alley hooch), Dodd befriends his stowaway and begins to personally instruct him in the methods of ‘The Cause’. Can Dodd find something worth saving in the wreckage of Freddie’s life? Will Freddie’s bluntness be able to cut through Dodd’s insidious snake oil? You’re about to spend two and a quarter beautiful, beautiful hours finding out that you don’t much care either way. 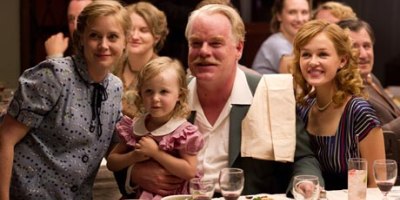 If you can bring yourself to disregard the hype (which we couldn’t, frankly) and meet The Master on its own terms, there’s just something missing. The story is fragmented, hurried and frustratingly incomplete – you can quack on about studied ambiguity all you want, More Pretentious Critics, but it’s one thing to conjure a sense of alienation onscreen and quite another to leave an audience feeling that they’re not really important. Every aspect of the cinematography is just as gorgeous as you’d expect, and Jonny Greenwood’s score more than matches the visuals – but it’s an awful lot of window-dressing for a plot that just doesn’t deliver and characters with whom it’s impossible to engage. It’s not that there’s a barrier, just a chronic lack of substance.

This isn’t the fault of the cast, for the record. Joaquin Phoenix gives yet another extraordinary performance as Freddie, contorting his entire body to create a hunched, simian figure who growls his lines through half a mouth. Philip Seymour Hoffman’s turn is a little more phoned-in but still authentic and very watchable, particularly when affable Lan’s mask slips – one or two moments are genuinely reminiscent of Mark Ruffalo’s blink-and-you’ll-miss-it Hulk transformation in The Avengers. Amy Adams is particularly noteworthy as the Master’s dutiful wife, who nevertheless seems to have more influence over the Cause than its adherents are aware – however, this promising subplot is, along with so many others, abandoned. All three actors are at the top of their game and all deliver the goods – the problem is that the goods are extravagantly wrapped but turn out, eventually, to be nothing but layers of glittery paper. 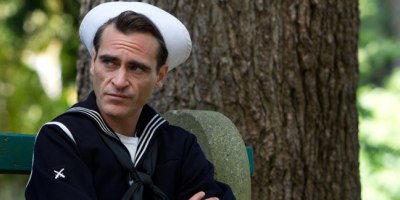 The Master is not a bad film. Taken on its own, the script is finely wrought and has some truly memorable lines. The more traditionally artistic elements are all faultless – and I do mean faultless. The performances are excellent. So what’s missing? At the risk of sounding as if I’m writing this in the Village while stroking my goatee, call it soul. Paul Thomas Anderson is as talented a crafter of films as he ever was; but where his previous films were flesh and blood and heart and breath, The Master is a beautiful, meaningless automaton. In a way, I’d rather it was a corpse.

Previous: Cheat Sheet: Daniel Craig
Next: Bryan Singer suits up for X-Men: Days of Future Past