Water for Elephants is a strange beast, trying to be a whimsical blockbuster whilst seeming to long for a lot more action. If you marry the physical beauty of Robert Pattinson with the cerebral Christoph Waltz, add a pinch of Witherspoon and throw in a circus set, voila you have one gigantic melting pot of a movie that delivers some beautiful cinematography, a little whimsy and a whole lot of violence. " /> 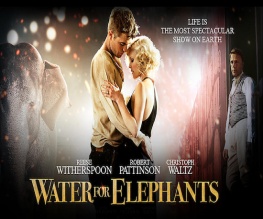 Set in 1931, Jacob (Pattinson) is on his way to becoming a Cornell educated super vet. Then, with nothing left at home he decides to jump on a passing train, as you do. But aha the train he lands on is in fact carrying the Benzini Bros travelling circus, and Jacob becomes our window into the glorious days of the Big Top. Sumptuous shots of lion tamers, strongmen and all the other well worn clichés greet us as Jacob meets a motley crew of circus hands. He notices star horsewoman Marlena (Witherspoon) and soon discovers her raving mad husband, circus ringmaster August (Waltz). In Jacob’s dealings with August’s menagerie, he develops a sweet relationship with scene-stealing pakiderm Rosie, and gradually discovers that August is about twenty sandwiches short of a picnic. There’s also some (but frankly, not enough) soppy romance as Jacob falls for Marlena, before concluding that he must run away from the circus. Clever. Coming in at two hours, the story has pace, until the last twenty minutes when it goes full tilt. The film could so easily have been twee, but the pumping storyline and mammalian theatrics ensured that never happened, and I really enjoyed it. But Water for Elephants is not without fault. The setting and animals were amazing, nevertheless you get the feeling that director Francis Lawrence (I am Legend) would rather have made a bloodthirsty masterpiece than this whimsy slash gorefest 12A tale. R-Patz has consistently found that his star power vastly overreaches his acting talents. Jacob should be a brooding character (remind you of anyone?), and although his knowing glances at Marlena speak volumes, ultimately Pattinson does not bring the necessary physicality to the role. However, he does look lovely with a tan and his acting is improving. This performance will only gain him more fans.

Witherspoon does a commendable job with a top-billed role that woefully underuses her talents. Her stunt elephant riding is a sight to behold, and she wears the most fetching set of Thirties evening dresses I’ve seen to date, but Marlena is frankly a massive wuss required mostly to fake smiles or look mournful; a fault with the script. Nonetheless, her role is to give the plot an emotional core, which she does so with aplomb. It is a shame that both Witherspoon And Hal Holbrook (who cameos as the older Jacob recounting his life) are used as elegant plot devices rather than as rounded characters of their own. In fact, Holbrook’s part adds precisely zilch to the plot.

Unsurprisingly, the real star by a million miles is Waltz, who basically reprises his Inglourious Basterds role with relish, showing a bewildering cruelty towards man and beast. He consistently acts everyone else off the screen, except perhaps, the elephant. He is menacing enough to take on the deranged August, but Lawrence fails to allow us to sympathise within him for a second. I would have liked to have seen him dial it down a notch.

Lawrence is obviously enjoying himself portraying a world of illusion with a dark underbelly. He has, like a lot of directors (cough cough, James Cameron) got an eye for a landscape shot with no clue as to how to demonstrate human interaction. He should have calmed down Waltz, beefed up Pattinson and given Witherspoon a backbone. But he really comes into his own with the violent last scenes. Oh how I adore (not) seeing every main character get punched.

For all its little faults, Water for Elephants is still unlike other films out today, as a very pretty melodrama with a violent heart. Lawrence continues to be one to watch.