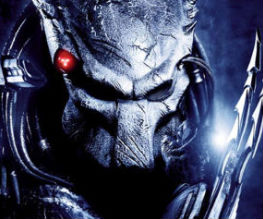 The film goes back to basics by taking the franchise back into the jungle where it belongs, in a story which sees the world’s nastiest killers parachuted in to an alien planet to be prey for the predators.  The writers haven’t bothered to give any of the killers many characteristics beyond their professions – mercenary, Yakuza, Mexican gang lord.  As such, the film avoids any hackneyed action movie sequences of the group bonding, giving the film a mean edge. Having such simply drawn characters however, means that every character’s story arc is instantly predictable, particularly that of the nerdy doctor that doesn’t fit the nastiest killers brief. Every beat of the plot is so heavily signposted that it removes much of the fun for the viewer, who can predict every death and every ‘surprise’ faster than a psychic on speed.

But both the death scenes and the action scenes do deliver, offering enough adrenaline-pumped gore to keep the audience distracted from the weak characterization and lazy script. However, its heavy reliance on its bloodier aspects has it meandering from one action sequence to another until Lawrence Fishburne pops in to nudge the film towards its climax.  Fishburne’s surprisingly amusing turn gives the film a kick up the backside, but it is all too short and feels like a wasted opportunity.

In another surprising choice of casting, we have Adrien Brody taking on his first action hero role, to the collectively raised eyebrows of Predator fans. The Governator he ain’t, but thank God for that. He manages to make the apathetic and merciless mercenary Royce watchable, and clearly has fun growling and sneering his way to the film’s conclusion. His tough but fallible body grounds the film in a reality that the inflatable muscles of Schwartzenegger could not have done.  Special mention too goes to Alice Braga, who manages to make the pointless-woman-in-an-action-film role slightly less annoying. In the few scenes in which she isn’t trying to coax some heart out of Brody’s character, she really shines.

Aliens successfully managed to up the action of its slow-building predecessor. The trouble with Predators is that the original was already a balls-to-the-floor brash action flick. Simply exaggerating the action even further means that other elements, such as story and characterization, get completely eclipsed. It is leaner and tougher but has lost the delicious helping of eighties cheese that was such a part of the first Predator’s charm and has come up with nothing new to replace it with. What we are left with is a passable action film that while being an improvement on previous Predator sequels, by no means represents a return to form. Perhaps it’s time to put the predator out to pasture.

Did Predators work for you? Let us know!