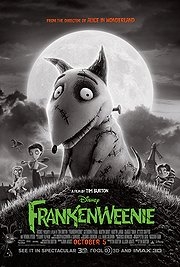 Frankenweenie tells the story of Victor, a young loner whose only real pal is his lovable dog Sparky (which begs the question; why exactly isn’t the film called Frankensparky?) Voiced by Charlie Tahan (and bearing more than a passing physical resemblance to Burton’s muse Johnny Depp), Victor is a spirited young lad, with a penchant for creating movies in his attic, and is particularly adept at science. When his oblivious but caring parents coerce him into joining the school baseball team in the aim of encouraging Victor to be more “normal”, Sparky comes along for the ride, and when Victor unexpectedly hits the ball out of the park, Sparky switches to automatic, and plays fetch right into the path of an oncoming car. Inspired by eccentric new science teacher Mr. Rzykruski (Martin Landau), Victor uses his know-how to bring Sparky back from the dead using electricity, à la Frankenstein.

Frankenweenie bears more than a passing similarity to another recent horror-themed stop-motion animation in the excellent ParaNorman. The opening moments of each film follow pretty much the same beats; loner kid; parents who don’t understand; both open with footage of a low budget movie; hell, even the fat kids in each hero’s class look startlingly similar. And if ParaNorman has more to say, with its themes of acceptance – of both the living and the dead – expertly conveyed, Frankenweenie is more concerned with being a pitch-perfect homage to the horror-movies of old.

Beautifully, evocatively animated in black and white, Frankenweenie also features the voice talents of Catherine O’Hara, Martin Landau, Winona Ryder and Martin Short (who does an uncanny Nick Nolte growl as the town’s mayor) and sees Tim Burton firmly in his comfort zone, reveling in the opportunity to so openly pay his respects to the movies that have inspired his entire career. Young Victor, (that’s Victor Frankenstein – neighbor of Elsa Van Helsing, etc) shares his science class with characters that resemble classic horror icons – both real and fictional. From Vincent Price and Boris Karloff, to Frankenstein staple Igor, and a character merely known as ‘Weird Girl’, an intense oddball with a psychic cat. The animation on all of them is fantastic; even when not saying or doing anything of interest, the simple face-design of, say, Edgar “E” Gore, or a meow from the permanently wide-eyed Mr. Whiskers, are funny enough to wring laughs and grins on their own. 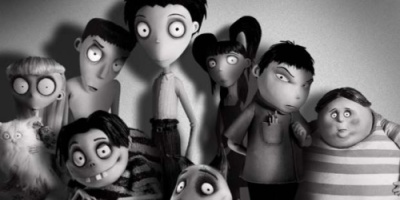 The film is absolutely riddled with sight-gags; from the obvious – Sparky the dog’s canine love interest getting an electric shock only to find herself with a striking Bride Of Frankenstein hair-do – to the blink-and-you’ll miss it variety, such as with the various gravestones in the pet cemetery that poor Sparky is buried in. As amusing as the film is, it’s not without heart or pathos. When reactions to Sparky’s resurrection cause people to freak out, the formerly dead dog gets spooked and runs away – not to best friend Victor’s arms – but to his own grave, where he curls up to sleep in front of his own headstone. It’s a moment as lovely as it is surprisingly dark, for what is ostensibly a children’s film.

Sadly, while the opening of Frankenweenie is excellent, with the introduction of each new character bringing with it another loving pastiche of a stock horror character (Mr. Rzykruski’s inappropriately impassioned science lectures are a Vincent Price inspired joy), the middle-section drags unforgivably. It’s dead weight. With virtually nothing of interest happening, the film stalls, much like Sparky himself does when his lightning-induced resurrection demands a top-up burst of electricity. 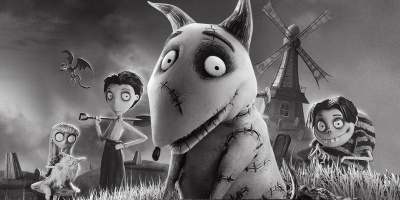 The climax, on the other hand is a total joy. As the rest of the weird misfits from Victor’s class attempt to replicate his experiment on their own lost pets, the town is overrun with hilariously twisted nightmare-pets. The resurrections-gone-wrong are hilarious, so I won’t spoil them here, but expect some gleefully menacing Gremlins-esque figures, and a particular staple of Japanese horror movies from the period (while it’s never made obvious in the plot, a background glimpse of ‘Bambi – Coming soon!’ on the local cinema is a giveaway that this is a period piece).

While the action-filled climax is fantastic, the ending is sadly a bit of a cop-out, and serves only to negate the film’s apparent themes, and all of Victor’s growth throughout the film. It’s a shame, and in the stop-motion horror face-off, it pits Frankenweenie slightly behind ParaNorman, whose ending was masterful. Frankenweenie doesn’t quite hold up as a classic, but it is a warm, beautiful and gently amusing ode to Frankenstein and the golden age of horror; one that sees Tim Burton back to something near his best. And given Burton’s recent track-record, we’ll certainly take that!