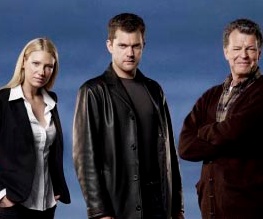 To recap, Fringe is a sci-fi TV series made possible by the longevity and success of The X-Files. Like its spiritual predecessor, Fringe has the FBI investigating paranormal happenings, busting conspiracies and trying to figure out The Big Picture on behalf of mankind, not that mankind is ever particularly grateful for anyone’s efforts in this field and would probably rather you just bought it a drink with a cherry in it. Fringe nearly got axed at one point due to variable viewing figures, but a strong fanbase pulled it through, so season 2 has been given the green light to do what it needs to do. Fox have also announced that Fringe season 3 is a dead cert – you can already see the premiere online. Strike one to charming sci-fi whimsy!

For those not up to date, Fringe covers the trials of the Bishop family – fringe scientist Walter Bishop and his entrepreneurial son Peter – as they’re coerced into working alongside a shadowy branch of the FBI specialising in the paranormal. The FBI and the Bishops discover a parallel Earth nestling snugly alongside our own. Does this spell the dawn of a marvellous new era for mankind? Or certain doom? Equally as importantly, will Peter and Olivia ever do a Mulder/Scully and get it together? Or will they have the sense to keep it simmering on the down-low while they get on with the job of saving the world?

Season 2 opens with a bit of closure to the Season 1 cliffhanger finale, as Olivia wakes in a hospital bed, brought back from Earth 2 by means of a car crash. Unfortunately, Olivia – a classic FBI chick, with black threads that barely hint at femininity and the sternly noble face of a greek statue – has no memory of the really important messages related to her on Earth 2 by Leonard Nimoy (played with a wealth of gravitas but a dearth of pointed ears). The season continues with the death of Olivia’s loyal sidekick Charlie Francis – a death that packs a punch in terms of the Big Picture.

Season 2 is also sprinkled with plenty of alluring glimpses at Peter’s origin, with one episode in particular focusing on the ramifications of Walter’s attempts to save his son as a young boy. Finally, amid a wonderful array of psychedelic odysseys and ridiculous paranormal creatures (only Fringe could pull off a meaningful encounter with an acid moleman scorpion baby) the whole season wraps up with a firmly-plotted two-part finale which gives us a satisfying view of Earth 2 and brings to a head many of the lingering questions put forward over the last two seasons.

In both seasons 1 and 2, Fringe season 2 does a fine job of recognising its strong points. This means it gives itself plenty of room to draw out the stories and interplay of its engaging leads. It keeps working on those super-intricate conspiracies, succeeding where Lost failed by balancing intrigue with much-needed answers to the satisfaction of the viewer. Lastly, it keeps up the charm and whimsy of its crackpot scientist Walter and his tendency to explore open-brain surgery, LSD experiments and crosstown bus journeys with an equal measure of infectious childlike delight.

There’s a whole slew of TV sci-fi series on the block, and they all do a mean line in big ideas, CGI and charismatic leads – but only Fringe has totally cornered the competition on whimsy.

Previous: Tommy Lee Jones is onboard for MiB 3
Next: Goosebumps books to be made into live-action film!