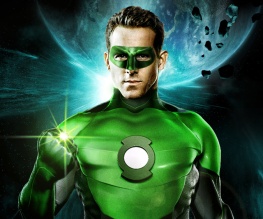 Green Lantern is many things. Most obviously, it’s quite green. There are also copious amounts of yellow and a dash of blue, but instead of looking like the day-glo crayon world of something like Speed Racer, director Martin Campbell has to adhere to 21st-Century Superhero Movie Rule #1: keep it dark. Dark makes it realer, see, more believable, because life is dark and depressing. Occasionally the fluorescent green searing through this does make for a reasonably exciting experience – particularly when it’s covering Ryan Reynolds’ considerable musculature – but this is a story that feels both visually and narratively muted.

Hal Jordan (Reynolds) isn’t a Green Lantern when we meet him. He’s a cocky, reckless, charming rogue of a pilot, who is, as decreed by Superhero Movie Rule #4, troubled by a childhood trauma – in this case, the dramatic death of his father in a plane crash. Of course, since Hal’s a rebel, he became a pilot anyway, despite the fact that vivid expositionary flashbacks to his father’s death almost cause him to plummet straight into the ground. But there’s also his ex-girlfriend, and heir-apparent to the aerospace company Hal works for, Carol Ferris (Lively, with tar in her hair) to tell him off and worry about him like a good love interest should.

Then, in a surprise to Hal but not to anyone who has watched the two plot threads awkwardly wrestle for fifteen minutes, he’s flown through the air to the side of dying purple alien Abin Sr (Temuera Morrison) and told that The Ring (not that one) has chosen him and he is now a Green Lantern. They’re an elite force drawn from throughout the galaxy that keep the peace and fight evil. As would all the geeks in the audience, Hal finds his new powers – basically the ability create anything through the force of his will – quite cool, but Sinestro (Mark Strong) is suspicious of the human capacity to harness the ring’s power. However, with enormously yellow thicket Parallax headed to devour the Earth it seems neither Hal or Sinestro will have much choice. And that’s not even mentioning the rather sad figure of Hector Hammond (Peter Sarsgaard), a scientist who becomes infected by Parralax’s fearful power and starts to go a little bit crazy (the big forehead was the clue). There’s a lot of plot in Green Lantern, but very little character and, to be as clichéd as the script, very little heart. The film cycles through its schematic plot as if it can’t wait for it to be over, often editing two plot strands together even when the contrast illuminates nothing. Reynolds’ considerable charm is misdirected into a character who is far too confident of his superiority and, despite speaking words that claim the contrary, never progresses from the basic conceited hotshot he starts out as. We’re offered the barest bones of an understanding as to how and why Hal becomes worthy of being a Green Lantern – in both his world and ours, he basically is because he has to be, not because of any feeling or will (feel the irony!) on his part.

Possibly the worst thing about Green Lantern is that it isn’t a total disaster. There’d be some fun to be had with that, and perhaps going all out for some sort of camp spectacle might have resulted in an ironic masterpiece. Green Lantern has solid effects work, a pleasantly unwhelming cast, and a jolting finale with a beautifully realised creature at its centre; but when a plot revolves around a man proving to the universe that humanity is his race’s greatest asset, it would have been nice to see the film taking the same attitude. The scene spliced into the midst of the ending credits tells us all we need to know – this exists to make money, so DC can make a sequel and make even more money. It’s not just a coincidence that dollars are green.