Baise-Moi has been mis-sold by almost all outlets. The promotional material, the morally outraged reviews, the threats of a prison sentence for owning the film in Australia, all lead to the impression that the film is violent, sick and reprehensible pornography. This is certainly not the case. It’s not nearly as stomach-turning as Antichrist, nor is it as titillating (it doesn’t have Willem Dafoe‘s wrinkled ballsack for one thing) – it’s just a bit fleshy. Yes there is senseless murder, yes there’s an occasional shot of bald dudes jacking their gnarled and unsettlingly moist fun-sticks, but for the most part Baise-Moi is so absurd that you can’t help but be charmed by the sheer audacity of it all.

I say “charmed” with exquisite sensitivity here – it’s charming in the way that Hannibal Lector is charming whilst he’s eating Ray Liotta‘s brains, but it takes a while to build up steam. The fun really doesn’t start until a quarter of the way through the movie, and considering Baise-Moi is a barely-theatrical 77 minutes long, the ambling and uncomfortable set-up really does put itself in danger of losing the audience entirely. The film looks rough, there’s no escaping that. Some scenes look like raw footage from Byker Grove, and the camerawork is rather uninspired considering the frantic nature of what’s going on – but the low budget sheen works to enhance the material. The New York Times went so far as to say that it “looks like hell”, but to criticise the film for its chosen aesthetics is to miss the filmmakers’ intention to shove grit directly into your ocular lobe. 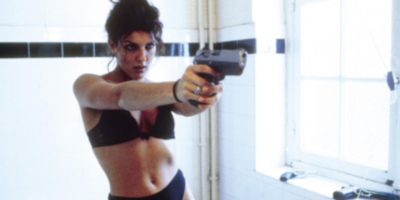 The hardest part of the film is a rape scene early on. It has brutal violence, penetrative sex and a cold, uncaring atmosphere to it all. It seems almost gratuitously horrific, but as Karen Lancaume (the actress who plays Nadine) so eloquently puts it in the making-of documentary, “the scene is unbearable because rape is unbearable”. This sentiment does illuminate the decision to include the horrid horrid HORRID rape, but although one can admire the filmmaker’s attempt to push the boundaries of art and expose their audience to the true nature of violence against women, the rest of the film deals mostly with giving perverts a bullet up the butt. 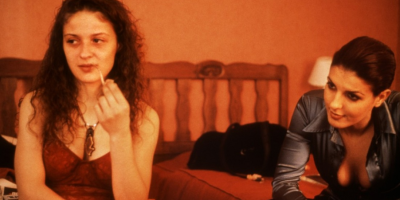 The author and co-director Virgine Despentes freely admits that she wrote Baise-Moi (variously translated as Kiss Me, Rape Me or Fuck Me, a list which sounds like a U2 song off the Batman Forever soundtrack) in a haze of punk music and (we can safely assume) enough cocaine to numb all the gums in Lyon. As such, Manu and Nadine’s Excellent Adventure into sexual and physical liberation is almost like watching separate skits that have been thrown together in a barely coherent mishmash. Although the desperate duo are victims to begin with, they quickly lose any sympathy, but quite frankly the characters wouldn’t care for your pity anyway. You see the girls for the first time in their lives without consequence, without accountability, sexually liberated and physically domineering thanks to their trusty selection of guns. It’s a little exhilarating to watch morally reprehensible characters simply doing what they do best without worrying what anyone else thinks of them.
There’s no real meaning behind any of the violence. Although a few of their murders are driven by feminist revenge (they are the more enjoyable of the random killings), some of their victims are entirely innocent, murdered for their money or their car. There’s no message, no social commentary, but damn if it isn’t entertaining. 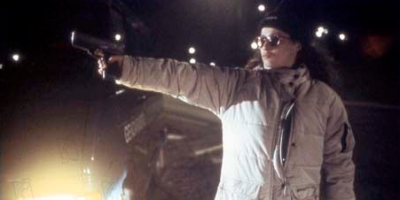 Baise-Moi is a mixed bag. There are some fantastic scenes that will have you bouncing up and down in guilty encouragement. The central performances by former-pornstars Anderson and Lancaume are superb, they keep you rooting for their characters even while they slip further and further into debauchery. Lancaume in particular whips out the pathos late on in the film to great effect. The soundtrack is an enjoyably weird mix between seedy jazz and early 90s punk, and the production values are grimly effective. There’s also the occasional quagmire to sift through. You don’t have to be a puritanical prude to grow sick of the frequent close-ups of what appears on first glance to be a frozen wonton, but upon closer inspection turns out to be a labia. Baise-Moi is messy, uneven and an occasional affront to human dignity, but it is also an uncompromising, interesting and relentless piece of cinema. Give it a watch, just go in open minded and, for the love of god, make sure your mum is safely out of the house.

Previous: All Things To All Men
Next: Catching Fire and One Direction’s This Is Us have new pictures