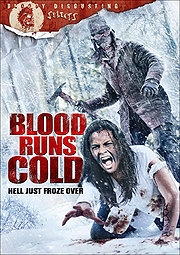 The plot follows a singer, Winona (Oldenburg), on her two week retreat from a stressful life in the city. Nothing spells out relaxation than a creepy old house in the middle of a snow storm. Ignoring the wisdom of the Sat Nav, Winona persists through the weather towards a house she believes her manager has rented for her. After tutting over the questionable state of the house, she decides that everything will look a bit cleaner if she gets pissed. TO THE PUB! Where we have the displeasure of meeting Winona’s ex-boyfriend, Richard (Saxe) and his lairy friends, Carl (Rylander) and Liz (Elin Hugoson). Surprise, surprise, everyone ends up at Winona’s place and the yeti makes many encore appearances. Considering Laguna created this horror with $5000 using a digital camera, the cinematography is pretty impressive. The result looks a lot more sophisticated than you would expect, with the inclusion of a few unique shots; the sharp focus on everyday objects after a grisly scene is particularly effective. The eerie soundtrack manages to help rack up the tension, keeping us nicely unsettled throughout the film.

Unfortunately, like many run-of-the-mill slasher flicks, the script is unoriginal, with an infuriating overuse of the word ‘Man’. Do you see any surfboards?! Characteristic of some horror films, the characters are all very very stupid. What do you do when you see the silhoutte of a man upstairs? Ignore it! What if you see a trail of blood leading into a nearby shack…where you’ve just seen some bloke go into with an axe? Follow it with nothing but appropriate weather clothing to protect you! But most importantly, what do you do with smashed glass? Pick it up with your bare hands! (Honestly – who raised these people?!). Oh, and the acting is roughly 80% god awful. The killer is a bit of an odd fellow. He likes to make mysterious noises yet also listens to opera music whilst chowing down on his victims. Yetis need to eat too! Ok, so he’s not a yeti, but there’s definitely some supernatural aura floating around him. Either way, he definitely makes a more interesting watch compared to the rest of the one-dimensional cast.