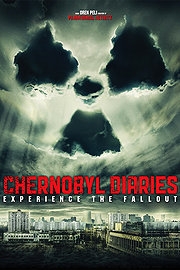 Before I get on with the urgent business of making sure that director Bradley Parker, his cast, their friends, their friends’ mums and their friends’ mums’ beauticians are irrevocably ruined as a result of this fucking diabolical film, I’d like to make one serious point. The Chernobyl disaster was twenty-six years ago, not two hundred and sixty or even fifty-two. Do you know what that means? It means that people are still being diagnosed with cancers as a result of it. The Ukrainian economy is still hobbled by the endless Chernobyl-related cleanup and containment responsibilities which it inherited upon the collapse of the Soviet Union. Authorities estimate that the Zone of Alienation, where Chernobyl Diaries is set, will remain uninhabitable for the next twenty thousand years.

We’re cool with making a cheap, lazy, exploitative horror film about all that, are we? Great. Chris (McCartney), a privileged white American, has spent the past few weeks meandering around Yurp with his WASPy girlfriend Natalie (Dudley) and her abruptly-single mate Amanda (Kelley). After taking inane photos in London, Paris, Rome and Frankfurt to the cheery strains of Supergrass, they’ve pitched up in Kiev to visit Chris’ unpredictable brother Paul (Sadowski). The plan is for the four of them to travel to Moscow, where Chris intends to propose and Paul is hoping to shag Amanda (despite vouchsafing the “fucking insanity” of Ukrainian girls to his unimpressed little brother). But Paul has something else in mind. Remember how we said he’s unpredictable? Should have seen this coming, upizdyshi! (That’s “motherfuckers” in Ukrainian, we think.)

Paul’s made a new friend – an ex-Special Forces grunt called Yuri (Diatchenko), who runs an ‘extreme tourism’ company taking brave or foolhardy foreigners into the exclusion zone surrounding Chernobyl and leading tours around the abandoned city of Prypiat. Paul manages to talk the girls around and Chris tags along, as do crusty backpackers Michael (Philips) and Zoe (Berdal). The intrepid gang run into an early problem when Yuri’s creaking van is turned away from the crossing point, but the guide has a plan. “There is more than one way into Prypiat…” Rerouting through an abandoned checkpoint, they drive into a concrete ghost town populated only by hardy plants, deformed fish and the occasional bear (“No extra charge for bear attack,” rumbles Yuri in the film’s best line by far). The plan is to stay for two hours and then head home, because is not good stay in Prypiat after dark. Why? Well, y’know, it might be full of a) massive, feral dogs b) mutated blast victims with a taste for Yanqui flesh c) sorry, did you forget about the FUCKING BEAR?

“…Something has chewed through jump leads of van!” And just like that, any semblance of worth in Chernobyl Diaries vaporises – just like Reactor Four did all those years ago. For about the first five minutes of Chris, Paul &c’s stay in the Zone, it’s possible to believe that Bradley Parker was at least trying to make something authentically scary. Abandoned buildings? Check. Rusting Ferris wheel? Check. Gosh, this might actually get quite atmospheric and interest- oh. Oh no, it won’t. You can tell it won’t because – and I really will just keep mentioning this – a FUCKING BEAR has just run THROUGH A BLOCK OF FLATS for NO REASON. Well, no reason other than Parker’s desperate need to construct a tension-tension-tension-RAA THING IN YOUR FACE moment every thirty fucking seconds. By the end of Chernobyl Diaries I felt like I could have snatched a fly out of the air, so tuned up were my nerves from ninety minutes of utterly pointless shock treatment. AARGH, some dogs pawing at the car! AARGH, some plaster dust falling in Paul’s face! AARGH, the corpse of Some Russian hanging from the ceiling! After a while I didn’t even blink.

It would be simplistic, however, to say that Chernobyl Diaries is nothing but identikit jumps – it’s so much worse than that. From the first ominous glimpse of cooling towers on the horizon it’s obvious that the plot, such as it is, will be dragging our heroes (which is to say everyone) towards Chernobyl as inexorably as if a mutant had them by the genitals. The characters are universally unlikeable, cowardly, backstabbing bastards with unfeasibly good hair, and their dialogue has to be heard to be believed. The cast is so monumentally dull and lifeless as to defy any attempt to find something to insult. Oh, and you know that rather clever thing horror films sometimes do when a silhouetted character flits behind an oblivious good guy? That happens three times in five minutes at one point. THREE TIMES. FIVE MINUTES. Mind you, those increasingly ridiculous moments seem like a blessing once you actually see the sad, pointy-eared, hydrocephalic monsters in their identical hospital smocks (HINT HINT HINT). If I wasn’t feeling charitable, I’d guess at Bradley Parker (or possibly one of his genetic benefactors) having soaked up a fairly hefty dose of gamma rays himself. Producer Oren Peli was rightly praised for his debut feature Paranormal Activity, a tense, terrifying film which exemplifies the maxim that it’s what you can’t see that’s most frightening. It could not be less similar to this stunted, deformed nonsense, which should certainly mark the last time Bradley Parker is ever allowed to be in the same room as a camera. Chernobyl Diaries didn’t screen for press in the USA, which was probably a good idea – this is the sort of uninspired, unwatchable fucking nonsense that we live to puncture with yellowed fangs and then tear apart with our razor-edged critical claws. But don’t worry, Bradley, you talentless twat… there’s no extra charge for bear attack.

Previous: Teaser for Monsters University released!
Next: Jim Carrey bails from Dumb and Dumber To

The ABCs of Death 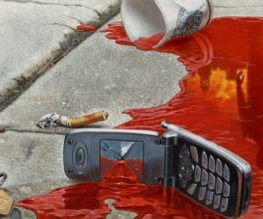 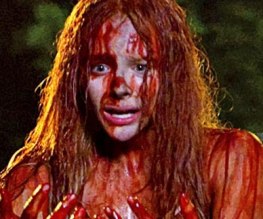