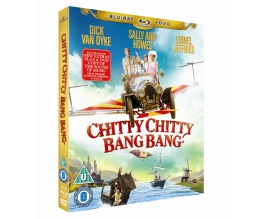 Caractacus Potts (Dick Van Dyke) is a struggling inventor who lives in a big house with his eccentric father and two (inexplicably english) children.

One day he buys a broken-down racing car and transforms it into a super magical automabile called Chitty Chitty Bang Bang. This car,called after the sound it makes, can swim and fly and save the day and is utterly brilliant. Unfortunately, Baron Bomburst (the evil ruler of Vulgaria, hammed up something rotten by Gert Frobe who keeps one eye menacingly closed throughout the movie’s duration) wants the car for himself, so he tries to kidnap the car and its inventor. The silly baron captures Grandpa by mistake, so Caractacus and the children must use Chitty Chitty Bang Bang to go on a rescue mission to end all rescue missions…

Pop fact: Chitty Chitty Bang Bang was written by Ian Fleming of James Bond fame. However, you’ll not find any James Bond levels of violence in this charmingly riotous kids film, unless you count the opening scene (a child is nearly run over and a car drives off the road and explodes). What you will find is 140 minutes of happy anarchy, with a plot that is pretty much centred around affection, machinery and sweets. In many ways, that makes this the perfect kids film. While the music isn’t stand-out, everyone knows and sings along to the title song. As an added treat, the screenplay by Roald Dahl and Ken Hughes also features a fabulous song and dance number where Caractacus Potts and Truly Scrumptious play Vulgarian puppets. The real draw, of course, is the Child Catcher… middle aged men are happy to admit that his soft crooning talk of lolipops still haunts their dreams.

Chitty Chitty Bang Bang is an absolute joy, and it’s now available as a Blu-Ray/DVD combo set so you can watch it in full glory or stick it on to entertain the kids on a long car journey. Is it a dreary Sunday afternoon? Is it cold? Is it wet and rainy? Medicate yourself with liberal doses of Chitty Chitty Bang Bang, the KITT and Herbie’s limelight as the best magical car by far.

Previous: David Slade and Scarlett Johansson for Pride and Prejudice and Zombies?
Next: Supernatural Season 5