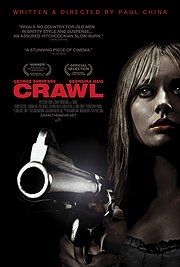 Paul China, when taking a seat in the director’s chair for Crawl, his feaure debut, was presumably attempting to pay homage to the great Alfred Hitchcock and the Coen brothers. You have the suspense-building music, the plot twists layered over a simple story, intense character interaction (usually just one or two people in a scene) and, of course, a soupçon of dark humour. But, about forty minutes into the film, you’ll begin to realise that this tribute has lost its way – horribly.

Let’s talk plot, shall we? The film opens with a Croatian cowboy negotiating a price for repairs on his “chocolate” coloured car. The mechanic quotes a number, the Croatian disagrees and, like any rational person, fires a bullet into the “greedy” workman’s head, turns on his heel and leaves. Next thing we know, he’s sitting in a the office of a sexist yet amiable drug dealer, who peels off a wad of notes and thanks the Croatian for his fine assassination skills.

In the meantime, a waitress named Marilyn (Haig) clocks off work early to light a few candles around the house as she waits for boyfriend Travis to get home. He’s running late, the bastard, so she runs a bath, changes into a pretty denim dress and investigates a strange noise. We know it’s not an INNOCENT strange noise because there’s a violin or two screaming shrilly in the background – so loudly, in fact, that it’s a wonder Marilyn can’t hear them herself. Then… BAM! The Croatian has suddenly appeared, easily overpowering her and trussing her up like a pig for the slaughter. God, we hope the man he ran down on the way here isn’t anyone important. God, we hope he doesn’t notice the axe casually stuck in the log outside. And we REALLY hope he doesn’t ruin Travis’ big proposal to Marilyn – it’s all she’s been talking about since she first appeared on screen. 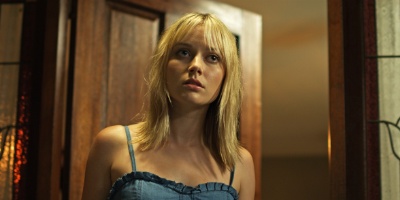 First things first, there’s absolutely nothing wrong with the cast per se, but not even Daniel Day Lewis could breathe life into this clunky script. For example Marilyn, after half an hour or so of talking weddings, suddenly informs us that her mother died when she was young and she still feels her presence in the house sometimes. Nobody’s asked her about this. It has absolutely no bearing to the plot whatsoever. One can only assume she’s realised that, up until now, she’s been presented as a two-dimensional blonde woman of indeterminate age. All we know about her is her first name, her job title and the fact that she wants to marry Travis. This is, without a shadow of a doubt, a desperate attempt to shoehorn in some serious character development as quickly as possible – and it feels laughably clumsy.

Secondly, there’s that utterly mad music. The violin, whilst admittedly a difficult instrument to master, does not alone a horror film make. Hitchcock, for example, uses music EXTREMELY effectively – just think of the shower scene in Psycho. Now imagine that cacophony of Bernard Herrmann’s all-string music being played over something rather dull, like a puppy nosing at a ball disinterestedly before padding off in search of biscuits. Does it have the same effect? Of course not. Without giving away TOO much of Crawl‘s plot (what there is of it, at least), let’s just say that there are far too many instances where the ridiculous Hitchcockian-puppy sequence comes into play. Two people sitting down staring at each other. Someone stepping on a cake. A strange noise in the bushes. DUM-DUM-DUM-DUMMM! 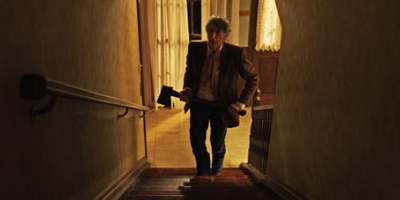 Most significantly, China’s heavy-handed directing skills leave much to be desired. Does having your characters react to things in slow motion make a tense atmosphere? No. Does revealing absolutely nothing about your pivot character make him more mysterious? No. Does a Croatian stranger in an Australian setting count as black humour? No. Does someone who, when their car breaks down less than a five minute walk from their home, wander the road aimlessly and then throw themselves in the path of a “chocolate”-coloured automobile? No. There’s even a sub-plot which involves an unpaid debt and a woman forced to submit her bare buttocks to a spanking; this is abandoned without resolution, presumably in a bid to move the plot along faster. It doesn’t – because, as mentioned, everyone tends to spend at least five minutes reaching for a door handle in utter silence.

In short, this film will make you smile – for all the wrong reasons. Formulaic, ridiculous and lacking conviction, we recommend that you crawl AWAY from Crawl as fast as you possibly can…