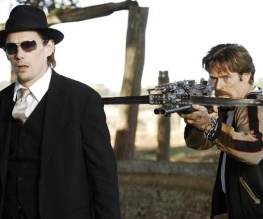 Warning – don’t go and see this film expecting another Twilight. No doubt that’s what the studio financing this Aussie-made vampire flick is hoping you’ll do, but the blood-suckers in Daybreakers are not so much your new-school pretty-boy vegan variety. They belong firmly to the old guard of demonesque bad guys who have overrun the earth and must be hunted down with big machine guns, crossbows with exploding bolts and other such gore-porn paraphernalia that will have teenage boys wetting themselves in excitement. It’s a genre that directors the Spierig brothers (of 2003’s low-budget zombie thriller Undead) are quite familiar with, and this time they’ve taken masters of the weird Ethan Hawke and Willem Dafoe along for the ride.

The film is set 10 years in the future (really, they could have gone for a slightly more believable date), when the planet has been overrun by vampires. Industrial human farms have made blood as big a business as Coca-Cola, underground walkways have replaced sidewalks and a dawn curfew has been imposed. Nevertheless, food supplies are running thin (as evidenced by a tongue-in-cheek “Will Work For Blood” sign held up by a homeless vampire) and hematologist Edward Dalton (Hawke) is charged with the task of finding a synthetic blood substitute to satisfy the masses. A long way from Robert Pattinson he may be, but Dalton is still a bit of a leftie vamp, and wants to find a cure for vampirism rather than a temporary fix. He hooks up with the human underground, led by the fit Audrey (Claudia Karvan), and meets scientist Elvis (Dafoe), who’s come up with a cheap vampirism cure that the fat cats in the blood industry obviously don’t want anyone getting their sticky hands on.

Not For the Squeamish

From that point on, the film pretty much abandons any pretence of being a clever parable on the modern-day squandering of finite resources, or the cynicism of the pharmaceutical industry, and just becomes your typical humans-versus-monsters blood and guts fest. It’s a shame, because the Spierig brothers initially set up an intriguingly bleak future world for us to be immersed in, with minimal dialogue and grey, oblique cinematography. The cast, although top-notch, is wasted, with Hawke phoning in his performance and Sam Neill underused as a ruthless CEO. But for those who like that sort of thing, the shoot-em-up scenes are pretty awesome – instead of your usual shrivel-and-die type vampire deaths, the beasties in this instance explode in a giant splatter-cloud of blood, their heads blowing off like a drunkenly-removed cork in a bottle of New Year’s bubbly.

If Daybreakers was indeed trying to be intelligent or metaphorical, it fails. But it’s a good enough afternoon’s entertainment if you feel like having a couple of pints with your mates and going to see something violent.

How did you rate Daybreakers – too much stupidity or just the right amount? Leave us your thoughts.

Previous: Spacey To Star In Chinese ‘Inseparable’
Next: Rudd and Galifianakis for Kooky New Comedy