Love and Other Impossible Pursuits 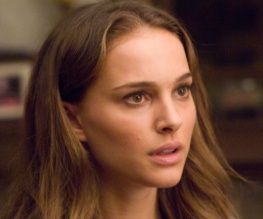 Remember Don Roos? Once upon a time he made the deliciously acidic The Opposite of Sex, but these days he’s mostly concerned with keeping Lisa Kudrow in gainful employment – most recently in Love and Other Impossible Pursuits. Still, it’s got Natalie Portman in it, and she’s more or less incapable of making a bad film! Right? Wrong.

(Ignore the title in the trailer; someone obviously thought The Other Woman wasn’t sympathetic enough and changed it.)

Emilia Greenleaf (Portman; we promise we didn’t make that name up) is surrounded with impossible tasks. The impossiblity of falling in love with a married m- oh no, wait, she succeeds there, as Jack (Cohen, who starred in that other ‘Love and Other…’ film) happily turns his back on his wife Carolyn (Kudrow) for her. The impossibility of getting your stepson to like y- oh, hold up again, because William (Charlie Tahan) actually seems quite predisposed to get on with Emilia. In fact, the awkward little moments and arguments which pepper their relationship aren’t much different from those you might have with your biological mother; although the audience never sees much of Carolyn and her son together, other than to show what a dreadful bitch she is. Mind you, if there’s one thing that’s likely to make you shrewish and embittered it’s Natalie Portman stealing your husband.

After Black Swan, Love and Other Impossible Pursuits is almost aggressively pedestrian. The camera is once again glued to her, though in this case it seems less artistic and more clunky – it’s simply not interested in the world beyond Emilia. Mind you, she’s got the pregnant friend (a wasted Lauren Ambrose) and the GBFF (Anthony Rapp) who exist merely to show that she’s not a loner/loser/stalker/homewrecker, and the camera stays squarely on street level at all times so that we never lose track of what poor Emilia is doing. Portman’s limitations as an actress are distinctly in evidence here – where Darren Aronofsky could shape them, channel her strengths and shift the demands of her role onto her physicality, this much flimsier character-piece rests on her face, and she can’t maintain her studied blankness forever. Portman rolls with the lame punches of the film, her reactions coming two beats after you’ve already figured out what they’ll be. She’s shown up by Kudrow late on in the film, when the older actress turns one of the most awkward scenes in the film into one of its finest by finally exploring the depths of her previously abrasive character character. Meanwhile, Portman sits in front of her, sobbing in her usual unconvincing manner. It wouldn’t have been impossible to make an audience feel for Emilia, but Roos piles so many clichéd pleas for our sympathy into the film that none of them really stick.

Previous: Heigl goes brunette for One For The Money. It doesn’t help.
Next: Martin Scorsese and Lars Von Trier join forces?!