Heigl goes brunette for One For The Money. It doesn’t help. 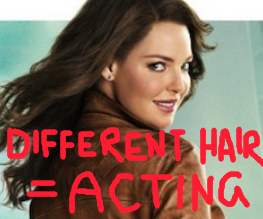 Having discovered that dreadful rom-coms such as The Ugly Truth and 27 Dresses aren’t made any less dreadful by the addition of blonde hair, serial unfeasibly-hot-girl Katherine Heigl has done the only sensible thing an actor in her position could. She’s gone brunette. OMG.

In a plot apparently mirroring utterly the (terrible) The Bounty Hunter, Miss Heigl stars in One For The Money – a tale following an out-of-work lingerie buyer (never trust a film that has been forced to include a lingerie buyer) named Stephanie Plum, who takes a job working for her cousin Vinnie as a bounty-hunter. There’ll be a man she has to track, that man will turn out to be a charming man, she will hate this man, she will love this man, and on and on it goes. *EDIT – I have been reprimanded, quite rightly, for not mentioning the fact that the above film is based on a reputable book series, and as such might end up being alright. (Yeah, we’ll see. Worst f*cking poster I’ve seen in TIME) *

Previous: The Rise and Rise of Justin Timberlake
Next: Love and Other Impossible Pursuits