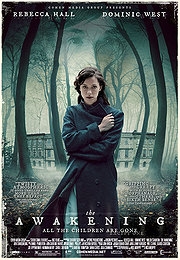 Can we please all agree that creepy ghost-children are pretty much played out? They come in two varieties: little girls with long, straight hair (usually black or blonde, never ginger) or boys with bowl haircuts. The Awakening falls solidly into the latter category, complete with horrific face-stretching screams and everything. That said, for a movie without a single original long-dead bone in it, it does a pretty good job. It’s 1921, and everyone’s still getting over that little dust-up they had on the continent a few years back. Florence Cathcart (Hall) is an author and professional sceptic who spends her time crushing people’s dreams of talking to the sons who dies screaming in a ditch, pulling the wool of people’s tear-filled eyes and debunking supernatural fraudsters by the (Cath)cartload. Enter the dour Robert Mallory (West), a History master at a remote boys boarding school who reports that one of his pupils has been scared by a ghost… to death. So, um, could she please debunk it, if she’s not too busy.

She isn’t too busy and soon heads her way to the school to catch her some ghost, encountering the sceptical yet sinister matron of the place, Miss Hill (Staunton). Soon the spectre’s in full swing and it’s up to Florence to catch or expose the ghost before it has a chance to make the audience piss themselves too extravagantly. We’ve seen it all before. Of course we have. There isn’t a single scene or juicy scare that doesn’t follow the standard ghost-story structure beat for beat, while the dialogue syncs up perfectly with the atmostphere without adding anything desperately interesting to proceedings. The ending is interesting though; managing to be simultaneously predictable and a twist you won’t see coming, largely because you can predict that you won’t see it coming, and the exposition-heavy explanation is so convoluted it’s hard not to feel a wee bit cheated.

All the actors put in a good turn: Rebecca Hall brings some real depth to Florence, although it can be slightly jarring how “modern” the character is (every Period protagonist has to share the viewer’s social views, of course); while Dominic West broods and smoulders as he does so very well. Like everything in this film, save the ending, they play their part very well, but there’s no real sparkle. However, with a fantastical built atmosphere and a solid premise, we’re treated to an absolute master-class in the technical side of filming a ghost-story. The Awakening works its visuals, its lighting and its pacing with the firm, confident hand of technical mastery. There are also some quite frankly brilliant set pieces, most notably the disquieting doll’s house, the rooms of which mirror the real-life occupants (cribbed from M.R. James, but pulled off with style nonetheless). It’s a good movie, don’t get us wrong, it’s just that underneath it all, this ghost story has no soul.

Previous: New trailer for Pirates! In An Adventure With Scientists
Next: Woody the Woodpecker headed for Hollywood