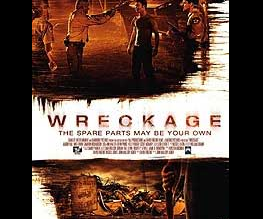 If you were a car, what sort of a car would you be? This question will never be answered in Wreckage. Nor, to be fair, was it ever asked.

After a strong start involving slack-jawed kids, loser parents and a mishap with a gun, we fast-forward fifteen years and best buddies Jared (Mike Erwin, Chaos Theory) and Rick (Aaron Paul, Breaking Bad, The Last House on the Left) are drag racing to spunk the long hours of their teenage lives away. What else can they be expected to do? They’re stuck in a town so small that its only point of interest is its inconvenient proximity to a giant correctional facility bestrewn with heavy searchlights and barbed wire. Oh, you know – a giant correctional facility of the sort that dangerous criminals often escape from. That sort. Jared and Rick find themselves stranded when a fan belt snaps in the middle of their race, much to the disgust of their girlfriends. No, their girlfriends did not enter the drag race. Don’t be silly. They stood around in ‘food stamp vixen’ miniskirt and ‘wholesome but you would’ short shorts respectively. That is what they did.

When you’re a stranded teenager the only option is, of course, to reject all the sensible options that immediately present themselves and instead go to a nearby scrapyard and steal a fan belt to fix the car. Miraculously, the mile-long walk along the road takes so long that a sunny afternoon becomes an inky black moonless night, as black as the heart of any miscreant who’d dare escape from a giant correctional facility located reasonably nearby. So very, very inky and black.

It turns out that trespassing in a photosynthesising scrapyard isn’t safe. Who knew? Not just because scrapyards apparently eat sunlight, but also because Jared’s fiancee Kate (Cameron Richardson, Harper’s Island) is left in need of urgent medical attention following some gun-related horseplay. As the teenagers go missing, it’s up to Jared and an inept local police force to thwart a killer lurking in the scrapyard, slaying its occupants one by one…

Wreckage is a nonsensical slasher with its heart in the right place. The plot allows a generous amount of room for pacing and characterisation, with appealing performances and dialogue that’s for the most part both engaging and naturalistic (except for the torturously-scripted clashes between Astute Teen and Befuddled Authority. Ouch).

Wreckage isn’t a car crash, but could have done with a bit more work down the chop shop. Incidentally, it’s worth catching just so you can be a Scoot McNairy (Monsters) completist. One to watch!