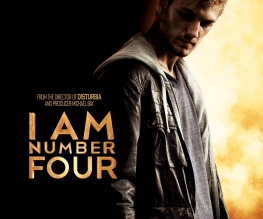 Oh, Alex Pettyfer. You were so charming in Tom Brown’s Schooldays, and it would have taken a miracle for you to squeeze some emotion out of that one-dimensional thug Alex Rider – nobody’s holding Stormbreaker against you. You’re twenty now; this is your chance to do something proper and cement your reputation as an actor worth watching. Just to be clear, it is not the time to star in some insipid sci-fi rubbish with her off Glee. Oh, this is only the warm-up before you pair up with Vanessa Hudgens for a Beauty and the Beast reboot? Really, Alex? Right, that’s it – we give up. Would you like an empty dustbin to burn your fledgling career in, Alex, or will you just use your worthless skull?

Number Four/John Smith/Alex Rider (Pettyfer) is a bronzed and gleaming surfer type with an odd guardian figure (Olyphant) and an excellent line in psychic scars. Scars that appear when evil aliens kill good aliens who are hiding on Earth. Good aliens like Number Four. Omgosh! Here’s the deal – when the planet of Lorien was trashed by the evil Mogodorians (you can tell they’re evil because they’re tattooed and wear black), nine Lorien youngsters were fired off to Earth to be hidden until their powers matured and they were capable of standing up to the bad guys, who are hunting them down in an arbitrary order. One, Two and Three are dead, so now they’re coming after Alex. John. Whatever.

The important thing is that he’s had to flee to a new town, and there’s a GIRL (Agron). She’s PRETTY. And if John pursues her it will put him at odds with her bastard jock ex, providing a love interest and a rival in one easy stroke! These aliens are bloody clever. Toss in a sci-fi nerd with a missing (abducted?) father, a dog which apparently started life as a lizard and John’s abrupt development of magical alien powers including but not limited to the GLOWY HANDS OF DOOM, and there’s enough mad half-plotted rubbish to keep things limping along for the full, brutal 104 minutes. Generally speaking, having a trademark cinematic style is good news for directors – the Coen Brothers weave matchless onscreen relationships in seconds, Mike Leigh tells stories with little more than rain and cardigans, Tim Burton does that gothic pinstriped swirly thing like nobody else. However, there can be few moments in the catalogue of human experience as utterly depressing as sitting through an hour and a half of near-continuous explosions and knowing, absolutely knowing with every fibre of your being that somewhere along the line Michael Bay has smeared his greasy, grubby mitts all over the celluloid. I Am Number Four had the capacity to be a perfectly average teen action film along the uninspired lines of Transformers, but the unholy combination of Bay’s hand on the production tiller and Alex ‘Persistent Vegetative State’ Pettyfer in the lead role combine to make it practically unwatchable.

There’s almost no plot, and what’s there is laughably predictable, Here’s how it breaks down. [SPOILER ALERT] Boy struggles with unusual responsibility/social exclusion/truculent parent figure, boy meets girl and conceals true self, boy realises no need to conceal true self, embraces what makes him different and consequently batters bad guys/wins girl, boy leaves girl behind to pursue greater good. It’s Spiderman with aliens, if we’re being honest. But where Tobey Maguire was charming and Sam Raimi was vaguely competent, Alex Pettyfer could have been carved from a particularly boring extraterrestrial tree and D.J. Caruso’s thought processes are more depressingly linear than even the most autistic Burton pinstripe. The script can be predicted three lines in advance, the supporting characters are utterly one-dimensional and the special effects budget is arbitrarily spunked away on a mental and unnecessary battle twenty minutes before the end of the film, which ends on perhaps the most offensively explicit here-comes-the-sequel voiceover in Hollywood history. Dianna Agron (Quinn from Glee) and Timothy Olyphant are both very attractive and too talented to be in something this pitiful, so they can have half a star each (as can the rather endearing dog) – I Am Number Four is otherwise irredeemable.

Previous: Bridget Jones 3 is on the horizon
Next: Short Film of the Week – God of Love