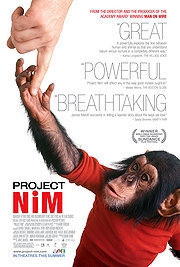 In the 1970s at the Oklahoma Institute of Primate Studies, a young chimp was taken from its mother as part of an incredible, ambitious and certainly ethically ambiguous experiment. Herbert Terrace, a scientist from Columbia University, intended to teach the chimp sign language with the hope that it would eventually learn grammar and be able to successfully talk with a human, and in order to achieve this, the chimp would have to be raised as if it were human. This chimp was given the name Nim Chimpsky, a pun on Noam Chomsky (obvs) who claimed that humans were the only animals capable of language, and nearly 40 years on, and 12 years after his death, his story makes it to the big screen in this wonderful documentary.

All the storytelling devices James Marsh used to make Man On Wire, the story of Phillipe Petit’s high-wire walk between the Twin Towers, so compelling are once again used here, and so despite never seeing or hearing him, Marsh is ever present throughout. Beautifully shot reconstructions, Dickon Hinchcliffe’s beautiful score, strong character introductions and great graphics all help to make the story flow with all the pace and structure of a conventional drama. Pretty much all the major players in Nim’s life before and after the experiment are interviewed for the film: project co-ordinator Herbert Terrace, Nim’s first ‘mother’ Stephanie LaFarge and various teachers who worked on the project. As is natural in a documentary, some of these characters you feel for more than others. While most truly seemed to have Nim’s best interests at heart, Terrace especially comes across as deeply unlikeable, having allowed Nim to be treated very badly after the experiment had finished, and seemingly used the project for his own personal notoriety more than anything else. The real star is, of course, Nim, the playful, drinking, smoking, intelligent, adorable, cat-loving nucleus of this film. The footage of him is wonderful, poignant and evidence of the strength of the bonds formed by Nim and his human teachers. Nim’s first encounter with another chimp at the age of 6 is truly like nothing I’ve ever seen before. Be warned though, footage of the animal testing laboratory which Nim is taken to as an adult is deeply upsetting. However, the obvious remorse shown by Dr. James Mahoney, one of the scientists involved in said laboratory, is enough to move you to tears.

Marsh has further proved himself to be one of the best documentarians, nay, film-makers working today here. I promise, you will be compelled and immersed from start to finish. Cutely enough it is being released in the same week as Rise Of The Planet Of The Apes, so do yourself a favour; have some Coco Pops, get in touch with your primordial side and go watch both in the most chimptastic day you’re ever likely to have. You shan’t regret it. 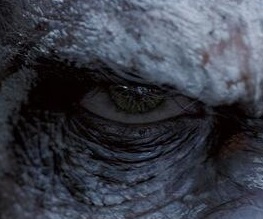