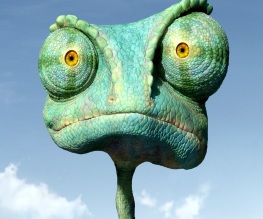 Gore Verbinski’s inaugural animated tale centres around the scorched, metaphorical town of Dirt, desperate for hydrating-salvation and nearing the verge of mob-uprisal. The stage is set for both an epic tragedy of Shakespearean proportions – and the tragic hero to match. Enter Rango (Johnny Depp), the lone (lizard) ranger, who is on a quest to find personal meaning, and rather conveniently, harbours a burning delusion of thespian grandeur.

Following a dramatic exit from captivity, Rango is stranded upon a highway with no direction. An armadillo (Afred Molina) – whose actual existence remains a dubious uncertainty throughout the film – points Rango towards the Old West, and the place called Dirt. It is here that Rango stumbles upon a threat to the town, and its inhabitants, with little hope and even less discernment, embrace the scaly stranger as their one shot at survival. Gunfights, snake-wrangling and mid-air bat chases – yes, bat chases – ensue, with Rango at the causal centre of it all. The story of Rango is set against the fiery backdrop of the Nevada Desert, where an alternate dimension of gunslinging, cold-blooded (as in reptilian cold-blooded) cowboys and simple-species townsfolk are banded together to create one of the most superb demonstrations of CG-animated magic. The work of the George Lucas-founded Industrial Light and Magic(ILM) CGI team is the starring role for good reason; the characters’ visual presence on-screen transcends the expected cartoonish treatment, journeying into a far more gritty and realistic Wild West vision. The result is a subdued sentimentality and a narrative that resonates with the viewer because of that (if only for the one hour and 37 minute running time).

The sequence of events is expectedly far from extraordinary, with the protagonist’s fatal thirst for acceptance, the inter-species romance and the eventual, perfunctory moral learning curve. But there are some mightily cool pit-stops along the way, from a Dali-esque/Pirates-reminiscent dream sequence to a scene which only the Sergio Leone-savvy would appreciate: the lizard with no real name meets up with the Man With No Name (bearing an uncanny resemblance to Clint Eastwood) – an unmistakable tip of the stetson to the spag-bowl champion of the western genre.

In short, the plot is predictable and the dialogue is conversely far too clever for the target audience peasantry, but much like the pearly wisdom of good ole’ Will Shakes, that doesn’t make it any less entertainingly good fun.