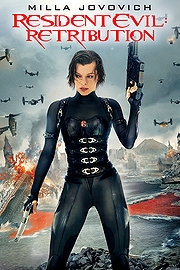 With the law of diminishing returns apparently overturned by the fifth instalments of both Fast and the Furious and Final Destination, the scene was set for Paul W.S. Anderson to deliver the Resident Evil movie audiences have been waiting for. In theory, anyway. Retribution continues where the previous instalment left off, with Alice (Jovovich, OBVIOUSLY) and her band of survivors standing on the deck of the Arcadia with a fleet of enemy helicopters bearing down on them.

Awaking to the illusion of suburbia, with what appears to be her husband (Oded Fehr) and deaf daughter (Aryana Engineer) sitting down to breakfast, Alice puts her decade-long ordeal down to a bad dream. It isn’t long, however, before the undead are once again at her heels, forcing her to flee with what remains of her family. When she wakes once more to find herself in captivity, she is interrogated by a brainwashed Jill Valentine (Guillory) and tortured by the revived Red Queen.

Freed from her confines by Ada Wong (Bingbing), an associate of the now-exiled Albert Wesker (Shawn Roberts), Alice is lead through another underground Umbrella facility as she attempts to rendezvous with the rest of her rescue party, lead by Leon S. Kennedy (Johann Urb). With Jill in hot pursuit, and various friends and foes awaiting them along the way, the team must cross a series of elaborate simulations — including Moscow, Tokyo and the suburbia Alice experienced earlier — if they are to make it out alive. 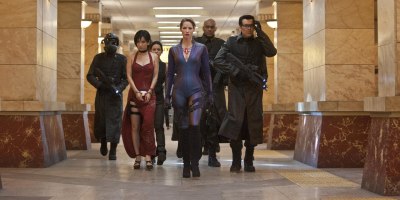 As you can probably tell, Retribution follows the familiar framework of the rest of the franchise: Alice wakes, escapes and quickly undoes whatever progress was made at the conclusion of the previous film. Wesker’s death is retconned, Claire (Ali Larter) and Chris Redfield (Wentworth Miller) disappear without a trace, and our heroes’ safe haven is sent to the bottom of the ocean. The inclusion of a child character suggests that Anderson is attempting to make his Aliens, when really the film only brings to mind the worst of Alien 3. There is no point investing in any of these characters, as the writer-director rarely plans more than one scene ahead meaning that nobody is attached to the franchise long enough to pursue any kind of satisfying arc, however perfunctory.

While it seems redundant by now to criticise a Resident Evil film for poor characterisation, Retribution isn’t so much underdeveloped as completely incompetent. Skimming over new characters so that various veterans can be resurrected as clones (ostensibly so that they can populate the various holodecks during simulations), the film revives Michelle Rodriguez simply so that she can die a few more times and everyone else so that they can dilute what little decent work they had done previously. Seriously, it’s almost enough to make you miss Ashanti. How the cloning itself works is completely beyond me, too, as is the point of having windows in your base when it is frozen a few miles below the icy surface of Kamchatka. 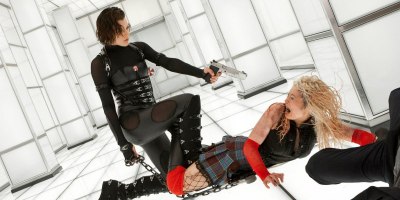 It’s not even as though you can merely lose yourself in the simple story and nonsense set pieces, as both seem to have been something of an afterthought – though what exactly they came after is difficult to say. Lunch, maybe. Or The Three Musketeers. Retribution seems to exist solely as a trailer for Resident Evil 6, albeit one with all the worst dialogue and sub-par spectacle. The audience with which I saw the film treated it as a comedy, with each line acting as either set-up (exposition) or punch-line (character work), but this did little to lessen the ordeal. The effects, meanwhile, merely rehashed those of earlier instalments, drawing the setting from 1, the lickers from 2, and the Majini and Axemen from 4 (note the lack of shared DNA with Russell Mulcahy’s Extinction, the best in the series so far). The 3D was pretty lacklustre, too.

Put simply, Resident Evil: Retribution is just an appalling film, even by this franchise’s own dismally low standards. Without a solid identity of its own, and with a narrative that would seem repetitive even by video game standards, Anderson has alienated his own extant fanbase while actively disencouraging new viewers. Ending in the customary cliffhanger, I can’t see this franchise lasting beyond the already announced Resident Evil 6.