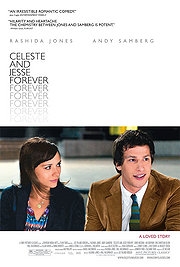 Celeste and Jesse Forever opens with a montage of a couple doing suitably ‘couple-ly things’, and by this I mean nausea-inducing things. Things like taking funny pictures in photo-booths, and writing their names in sand, and brutal murdering each other with chainsaws. Not really, I made the last one up. But in general, the opening montage, set to the strains of a particularly trite Lily Allen song, establishes this film as a sickening exercise in smug self-pleasure for sickeningly in-love couples. Thankfully, this bubble of vomit is soon burst as soul-mates Celeste (Rashida Jones) and Jesse (Andy Samberg) are revealed to be currently separated, pending a divorce. Shocker, huh? This interesting premise continues into some of the best attempts at original romantic comedy I have seen, however, this does not save the film from lazy slips into convention and cliche.

“Sometimes the end is just the beginning”?! PLEASE?!
So after the bombshell is dropped that best-friends-cum-spouses Celeste and Jesse are divorcing, we are subject to the worries of the community that their close friendship after a break-up is unnatural, leading both to attempt dating other people. Despite the fact that Jesse lives in his soon-to-be-ex-wife’s back garden. After painfully witnessing an incident between Jesse and a giggling blonde, Celeste begins to question whether she has moved on as well as she thinks she has.

After spending two weeks apart – the longest period they have since childhood – Celeste is rocked by the bombshell (yeah, that’s right, two bombshells in one film!) that Jesse has somehow managed to knock-up some poor girl since they separated. Since he has finally found someone who doesn’t flinch at the idea of having his children, he understandably decides to give it a go with Veronica (Rebecca Dayan) who does indeed look remarkably like a younger Celeste, as she remarks. In an attempt to convince herself she is over him, Celeste then embarks on a string of horrific dates, only to eventually, FINALLY, realise that maybe they weren’t right for each other and to admit what exactly went wrong. She announces this realisation in her maid of honour’s speech. Obviously. Anyway, then they get a divorce, then they snog (WTF?!), then go on to live, presumably, happily apart for ever after, leaving us with the empty feeling that we’ve just watched someone’s painful break-up unravel before us. Oh wait, that’s exactly what we have done. 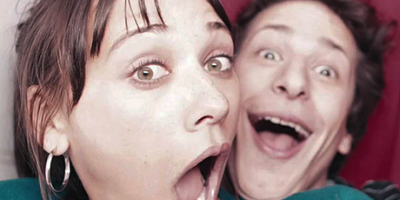 Rashida Jones is the undisputed star of this piece, the perfectly freckled angel managing to evoke gratuitous sympathy for Celeste, even when she is moaning the age-old cliche, ‘People always let you down’. This is a refreshingly honest portrayal of the pitfalls of negotiating a break-up – doing all she can to appear together on the surface then eventually breaking down into a self-obsessed pit of binge-drinking, binge-eating and binge-smoking. Oh, and going through her ex’s bins… Jones and her co-star Andy Samberg find a remarkably believable chemistry as two people who are irresistibly drawn together despite their better judgement. Samberg somewhat overdoes the kooky-goofy-quirky-loveableness at the beginning, but in dealing with an unexpected break-up and an unexpected pregnancy, he manages to imbue Jesse with much-needed pathos. Together Jones and Samberg stop this film from sliding into a shallow exploration of the problems of people-that-eat-kelp-and-order-chai-lattes-and-soy-cappucinos-and-do-Yoga. Which is no mean feat.

In terms of the supporting cast, Ari Graynor as Beth puts in a convincing performance as literally the best friend ever. Celeste hijacks Beth’s engagement party, and then her wedding, in order to bang on about her own marital failures. Quite frankly, I’d have pushed her in the pool. Will McCormack as Skillz is universally hilarious and Elijah Wood makes an unexpected appearance as Celeste’s self-consciously sassy gay friend. Emma Roberts as teen popstrel Riley puts an appealing and interesting spin on the generic stereotype of shallow, spoilt teen star. 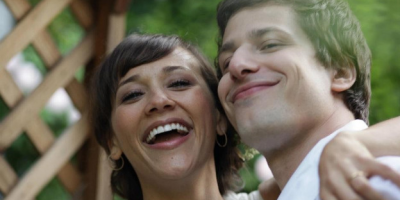 Krieger, working with Jones and McCormack’s script, makes a conscious effort to capture what Celeste would term the ‘Shitegeist’ of our modern era (Jesse and Celeste have drunken sex over the wreckage of an IKEA chest of drawers), but this original rehash of an aged genre falls shy of being quite indie enough. There are some really exceptional moments – the muted silence that accompanies Celeste’s tortured response to the fact Jesse is having anther woman’s baby is beautifully painful to watch. Whilst this film should be commended for remaining surprising throughout, the relationship premise is frankly depressing and becomes a painful reminder of how horrific break-ups can be, particularly in an age where heartbreak can be relived over and over again through the medium of Facebook photos. Celeste and Jesse are just not right for each other, and there’s not much that’s funny about that. Celeste and Jesse Forever is enjoyable and, in parts, original, but falls between the cracks of indie and mainstream, failing to contribute much to either take on the genre.