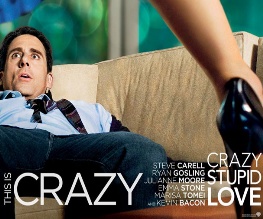 Americans are never too good at the ensemble rom-com are they? Let’s have a brief overview of the last few attempts. We had the universally patronising He’s Just Not That Into You, the woeful Valentine’s Day (the highlight of which was, weirdly, Taylor Swift) and the promisingly terrible upcoming New Year’s Eve. Meanwhile, the British seem to handle it pretty well, with Four Weddings and a Funeral and Love Actually being featured excessively in ‘the Brits do it better’ arguments everywhere.

Crazy Stupid Love seems to be one of the few examples of American movies bucking the established trend. The plot follows a similar pattern as the aforementioned films: that of a group of loosely related people looking for love. How exciting. Unlike V-Day and its counterparts however, these characters are actually easy to care about.

We open on Cal (Steve Carell) who has just been informed by his wife Emily (Julianne Moore) that she has slept with her work colleague, the evil David Lindhagen (Kevin Bacon). Oh, and she wants a divorce. In response, Cal wearily throws himself out of their moving car. What follows is the various love stories that mushroom around Cal and Emily’s divorce. We are introduced to their preteen son Robbie, who is fervidly in love with his 17-year old babysitter Jessica (“Demi Moore is 15 years older than Ashton Kutcher and they seem pretty happy. Just saying.”) Jessica in turn is in love with Robbie’s dad, the forty-something Cal. While the angst of this situation putters away in the background, we find the newly separated Cal spending his nights getting wasted on vodka cranberry in a chic singles bar. Here we meet love-rat Jacob (Ryan Gosling) who decides to take the depressive Cal under his wing. One half-decent hair cut and a pair of leather brogues later, Cal is a modern man, effectively wading in lady gardens. But wait, the best part is coming: Emma Stone is in it. EMMA STONE of LIKEABILITY fame. Here, Ms. Stone is in her first proper grown-up role as Hannah, a young lawyer who is seemingly immune to the charms of the aggressively charming Jacob.

A brief look at the plot(s) will probably garner an eye-roll from the hardened film fan, and I can’t say I blame you. There’s nothing very new here in terms of story: the lothario is redeemed through the Love of a Good Woman, the cuckolded (their word, not mine) husband attempts to win back the affection of his wife, and so on. However, the writing is consistently fresh and the material is handled exquisitely by the film’s accomplished cast. It’s a rom-com through and through, but it’s by far the cleverest and most elegantly composed one you’re likely to see this year.

The most refreshing thing about Crazy Stupid Love is that, unlike offerings from the Apatow school of emotional comedy, it doesn’t feel like it has to balance feelings with phalluses. True, there’s quite a lot of ill-fated casual sex, but we’re not forced to sit through twenty minutes of dick jokes or awkwardly hilarious sex scenes in order to understand that sex is happening. This is a movie that knows how smart it is, and doesn’t feel tempted to go on a relentless ‘not your everyday romantic comedy’ campaign (á la Friends with Benefits) in order to hold our attention. There are your usual bouts of misogyny (“The battle of the sexes is over, and we won. Women lost when they started doing pole-dancing as an exercise.”) but at its heart, it’s a movie with a deep respect for human relationships. Perhaps the only thing worth criticising about Crazy Stupid Love is that it tends to linger far too long on the central relationship, the divorce of Cal and Emily, rather than explore the far more interesting connection forming between Jacob and Hannah. At the end of the day, we’ve seen Julianne Moore and Steve Carell play middle-aged parents before, and doubtless we’ll see them again. What we haven’t seen is a drunk Emma Stone trying unsuccessfully to seduce Ryan Gosling, while he becomes growingly intimidated by her.

“I know what happens in the PG-13 version of this movie. I pass out, you drape a blanket over me and kiss me on the forehead. That’s not happening. We are going to BANG.” Unfortunately, instead of seeing more of this we get a lot of to-ing and fro-ing between Cal and Emily. It’s still entertaining, but you do find yourself wondering where that nice entertaining young couple have gone. The movie may not stick with you long-term, but its delightful froth and undoubtedly the final brick lain on our shrine to Emma Stone.