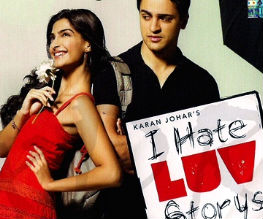 The story follows J (Imran Khan), a self-proclaimed Casanova and hater of boring, hackneyed love stories. That is until he meets Simran (Sonam Kapoor) – a desperate romantic currently living the perfect love story with her boyfriend Raj. He fancies her, she hates him, then she likes him, then he doesn’t like her, then – oh well you see where I’m going with this. I Hate Luv Storys has no real plot to speak of beyond the will they, won’t they of the central couple, which by the end has been overplayed to the point where even the most ardent romantic couldn’t possibly care. The whole film felt like I was watching the same five minutes fifteen times over, with dialogue virtually identical in scene after scene. On top of this, we have countless long musical interludes of the couple looking happy together, and then looking sad apart, which seem to punctuate the film every five minutes. By the end of it all I felt that if I had to watch J looking depressed over a beer one more time, I would have to tear my eyeballs out.

Though perhaps the most insulting thing about I Hate Luv Storys – even more insulting than its patronizingly misspelled title, which is clearly a misguided attempt to appeal to the younger generation – is the fact that it thinks it’s doing something different. The film has cynical J scorning Bollywood’s romantic conventions that have couples dancing through breathtaking scenery and elaborate sets, but then has him doing the exact same thing with Simran. It mocks the Hollywood romantic conventions of the elaborate plan and the running to the airport and then goes ahead and uses them too. The film points out how silly romantic devices are, and then renders the whole endeavour of doing so pointless by buying into them whole-heartedly, as if the act of pointing out its own clichés somehow lessens them.

To make things worse, I Hate Luv Storys isn’t even all that well put together, suffering from poor editing that has minor characters not properly introduced or coherently developed. I am shocked that this lazy and over-long excuse for a love story has done as well as it has. It was a terrible first experience of Bollywood, but not one that has put me off altogether. Rather, I Hate Luv Storys’ constant referencing to classic Bollywood films made me wish I’d just watched one of them instead. I’m sure I would have got a lot more story and a lot less laboured attempts at irony and postmodernism if I had. Avoid.

Previous: Leaving
Next: Leicester Square Premieres: Behind The Glitter