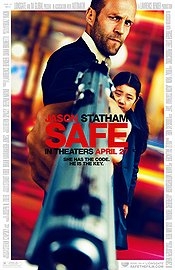 I get the feeling that Jason Statham is a really top bloke. Maybe it’s because I imagine he must have had a hand in this. Maybe it’s because before he became an actor he was an Olympic diver who sold dodgy watches on the side (true story). Whatever that indefinable quality is, it makes it very difficult to actively dislike any film he stars in. As such, his new film Safe is, though inevitably cliched and overblown, essentially alright by me. GODDAMNIT Statham, you know I can’t stay mad at you. Luke Wright (Statham) is a cage fighter with issues/dark past/scores to settle. You know how it is. Mei (Chan), meanwhile, is a happy little twelve-year-old maths prodigy with a photographic memory. Kidnapped by the Triads, Mei is brought over to New York and set to work as a “human computer” for their dodgy businesses. While Luke, haunted by his past and terrorised by old enemies, finds himself driven closer to the brink, Mei becomes caught up in a gang war. Asked to memorise a long number (secretly containing a code to a SPOILERS! safe) by her kidnappers, she is subsequently snatched by Russian gangsters seeking to get to the stash before the Chinese. Escaping and finding herself on the run from the Triads, the Ruskies and a gaggle of corrupt cops to boot, Mei crosses paths with the suicidal Luke who – sensing that Mei is in deep shit – decides to do the right thing. Luke steps in to save Mei’s life and, in doing so, discovers a reason to go on living. If you want to barf right now, go ahead. But the opening thirty or so minutes of Safe are actually fairly well constructed, and far less corny than that synopsis might have led you to believe. Yakin’s direction in this opening chapter is self-assured and restrained, with some stand-out touches. In one scene, Luke returns home to find a nasty surprise waiting for him. In a less thoughtful film, the soundtrack would be loudly signalling danger ahead, the camera swivelling wildly as Statham pummelled everyone’s soft, evil heads. But here, the scene is executed with a slow, quiet confidence reminiscent of a slick Michael Mann sequence from Heat or Collateral. All in all, these two sequences are – despite some effective Bourne-style close combat fight scenes later on – a helluva lot more affecting that the SHOOT SHOOT BANG BANG baddies-dropping-like-flies stuff that the film rapidly descends into around the halfway mark. Honestly, the body count by the end of Safe is really quite alarming. Henchmen/Chinese bystanders strewn everywhere! Perhaps the real shame here, though, is that Statham never gets the opportunity to show off his finely honed comedic chops. Anyone who has seen the Crank films will agree that, second only to his ability to punch the ever-living crap of everyone, Statham’s most notable talent is his comic ability – always deadpan and controlled amidst the maelstrom of madness going on around him. But writer/director Yakin seems to – with the exception of a few funny lines and one bit where Statham eats a meatball sub aside – largely ignore that.

By the time Safe reaches its rather lame, inevitable conclusion – all barrels empty – it is not so much limping from the spent energy as sort of shuffling indifferently, like a marathon runner thought ‘fuck it’ halfway through. There are certainly worse examples of the genre around, and Statham is – as discussed – always a delight, but with all the potential for something a little different it’s a shame the makers of Safe ultimately decided to play it, well, exactly that.