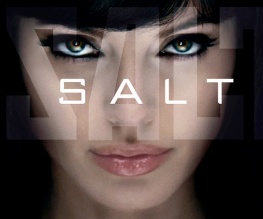 Meet Evelyn Salt – CIA agent, ex-spy, devoted wife and, perhaps, none of the above. After being released from a Korean military base for *insert backstory we never get to see*, Evelyn lives a quiet life working for US intelligence and folding napkins for her spider-enthusiast husband (seriously). However, her life is turned upside-down when she helps interview a Russian defector who informs the entire CIA that a Russian spy is in their midst. A spy that, tomorrow, will attempt to assassinate the Russian president on American soil. The name of the spy? Evelyn Salt.

Is this all a set-up? Should she stay and fight or run and… erm… fight? Trust us, it’s not only the American government who gets confused. But after about 20 minutes, you stop caring whose side she’s on – all we know is that she’s got guns hidden in her very lips. And she’s not afraid to use them.

Much has been made of the fact that Salt‘s title role was originally meant for Tom Cruise, and critics have clamoured eagerly to see how Angelina Jolie compares to the pint-sized king of blasting. Of course, Jolie is no stranger to the action genre – with Tomb Raider, Wanted and Mr And Mrs Smith under her tool belt, and her evident expertise makes Salt a joy to watch. Dedicated to performing her own stunts, director Philip Noyce is basically given carte blanche in terms of action sequences; and this freedom means that Salt is stuffed full of intensely satisfying set pieces.

Dialogue, plot and logical sense are tossed out of the window pretty early on (and when we say tossed out of the window, we mean EXPLODED through a SOLID CONCRETE WALL) as we are pummeled relentlessly with guns, leaps, car chases and cheekbones. It’s pure adrenaline from beginning to end, and the ridiculous plot twists (did she just kill… but that means… what? SHIT SHE’S JUST EXPLODED EVERYTHING AND I CAN NO LONGER THINK) just make the ride all the more enjoyable. The supporting cast all do their bit – Liev Schreiber and Chiwetel Ejiofor fluster their way through admirably as the CIA agents who are always one step behind.

She’s… keeping the suit on?

Exploding aside, from now on all action films should be written assuming that men are going to play them. Hear me out. Yes, it’s not the healthiest way to promote gender equality, but it may be the only way to start an action character from neutral. It’s so bloody refreshing to see an “action girl part” without the obligatory “cut to swimming pool” sequence, “seductive music plays” or “camera pans slowly to shower”. Perhaps its because Jolie is so mind-twistingly beautiful that if she were to put on a bikini our eyes would dissolve. Or maybe – and I do hope this is the case – the creators realised that an actress like Jolie can hold her own as a human being, without resorting to being a girl.

All in all, Salt is a great homage to the Bond-eque spy-thrillers of the 80s as well as a celebration of pure, unadulterated action. It lacks the sophistication of a true classic, but Jolie’s steely gaze and Noyce’s confident direction mean that you never stop to question how much fun you’re having.