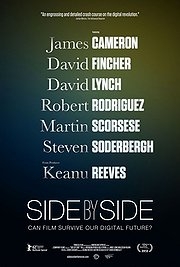 In 1999, there were only four digital projectors up and running in cinemas in the US. Comparatively, in 2013 that number is closer to the amount of 35mm projectors still in regular use. The conversion to digital in all corners of the film industry has been swift, and the change in how films are produced, edited and seen on the big screen has inarguably been altered forever. Side By Side tasks itself with assessing what’s been gained and lost in the digital age, picking the brains of some of Hollywood’s foremost filmmakers including Martin Scorsese, David Fincher and Christopher Nolan.

It’s difficult to quantify exactly how much romance exists between audiences and cinema in 2013. Certainly amongst cinephiles and scholars obsessed by the physical essence of the artefact, the gradual phasing out of films shot and released on actual film stock represents the death of the 20th century’s most popular format. The film strip running past the projector’s bulb at 24 frames per second, the whirr of the machine, the indescribable ‘wobble’ of the image, the rare beauty of 70mm, the- yes, ok, fine, we get it. If we’re being completely honest about the so-called ‘death of film’, most cinemagoers probably haven’t noticed much difference in the experience save ever-increasing ticket prices. As for future generations? Raised on digital images, the romance of film must seem like the exclusive domain of elderly, misty-eyed nostalgia.

Thankfully, nostalgia is largely left alone in Side By Side. Those interviewed are almost all seasoned veterans of the screen, as technically astute as they are occasionally given to decrying film’s final fade. Thus, most of the digital lamentation is coupled with sound justification rather than the kind of technophobic ranting associated with vinyl-hoarding uncles. Older cinematographers bemoan the lack of ‘in camera’ work and an over-dependency on post-production tinkering, while directors such as David Fincher are glad to see the end of nail-biting waits for rushes. George Lucas, unsurprisingly one of the earliest adopters of groundbreaking digital cameras such as the 35mm-aping FDW-F900, talks amusingly in terms of ‘fixing’ cinema and finds an equally zealous ally in Steven Soderbergh. While waxing lyrical about developments like the RED One camera and Sony/Panavision’s aforementioned monolith, both Soderbergh and Lucas display a yen for digital technology that borders on the pornographic. What is it they find so seductive about these cameras and the malleability of digital technology? 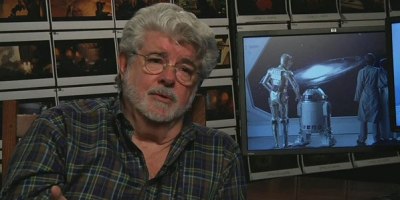 For Lucas, it’s the old chestnut of being able to realise his vision, to dream bigger, to sweep the physical restrictions of special effects under the rug of CGI. Soderbergh, once (and still occasionally) a highly independent filmmaker, values the upshot of cheaper cameras, faster turnarounds on films and the comparative efficiency of recording digitally. Both (and many others interviewed) see the camera as a weapon of pure functionality, a tool in the artist’s box that once dictated the parameters, now beholden only to the power of a director’s mind. Digital means more filmmakers, more films and more freedom. Now everyone can make movies. Whether everyone should be making movies is a question briefly touched on, though hardly explored.

Side By Side isn’t a gruff, academic account of a painful moment of transition in a beloved medium. It feels industry-made, welcoming older hands to have a pop at a younger generation, but far more comfortable letting the Wachowski siblings espouse whiffy futurisms redolent of ‘greater connectivity’ and ‘virtual lives’. Much time is devoted to explaining the cumbersome nature of developing and distributing film stock, but the remedies provided by the digital process sound a little disheartening when constantly repeated. It’s all faster and cheaper now. While they’re referring to the literal economy and process of making films, when laid against clips from Attack of the Clones or Avatar, the description can’t help but reflect the artistic quality of the finished product. Side By Side seems mostly oblivious to the widely accepted opinion that 99% of Hollywood’s output is irredeemable rubbish, and its ‘look at what we can do now!‘ attitude comes off as egregiously back-slapping at times. Despite this, it’s a thoroughly engrossing look at the state of cinema today, not to mention a generous insight into the methods of some of the boldest directors around. 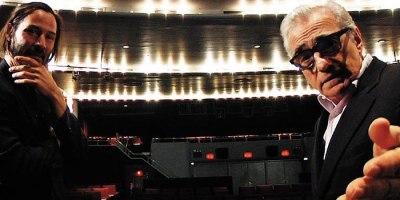 Most pragmatic of all is Scorsese, who wisely recognizes the importance of archiving. Film stock is notoriously robust stuff, while hard-drives die and films stored as numeric sequences are more susceptible to obsolescence and permanent loss than one might think. Are films worth storing? Does a cheaper medium mean a cheapened medium? We hear reference to a lack of ‘tastemakers’, but that’s all we get about the artistic side of Hollywood’s digital era. Thinking about digital media outside of Hollywood, there’s any easy comparison to make that lays out the frustrations of many: In 2012 Instagram was sold for $1bn, while Kodak remains bankrupt. It’s a swamp worth wading into.

Side By Side remains an energising if at times biased watch. It demands discussion, being only the tip of a sizeable iceberg. Digital filmmaking has sent ripples through over 100 years of cinema, marking a clear line denoting its past and future much like the advent of sound and colour did. Whether you weep at film’s decline or welcome a new democracy of availability and access, Side By Side is savvy enough to acknowledge that whatever your stance, things will never be the same again.