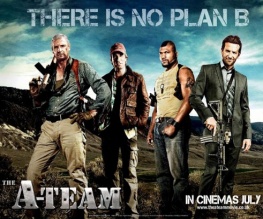 This summer is all about the 80s. We’ve seen Jackie Chan take over from Mr Miyagi in The Karate Kid, heard the first rumblings about an inexplicable remake of Total Recall, and now this; the A-Team, the kings of Saturday teatime telly, are exploding out of a maximum security stockade (again) and onto the big screen. Hurrah! And…

There are a lot of BANGs in The A-Team. An awful lot. At times, you wonder if it would’ve been simpler to loop a clip from The Phantom Menace of Qui-Gon looking worried, then watch it for eighty minutes whilst blowing up your living room piece by piece. You have to be reasonably alert to pick the shredded dialogue from between the sonic booms, but that’s okay because if you so much as think about dozing off then not-quite-Mr.-T will probably kick a chopper until it explodes and your heart ruptures in your chest. Basically. everything about this film – hackneyed 80s remake, mad casting, Mohawks – should conspire to make it bloody awful. Yet somehow The A-Team manages to be really, really good fun.

“What are they doing, sir?” “They’re trying to fly that tank.”

After a black ops mission goes awry, the team is split up and incarcerated for “a crime they didn’t commit” (a nod to the famous intro sequence to the TV show), before immediately escaping and improbably bopping all over the world in pursuit of their nemesis Pike (Brian Bloom). Needless to say, the A-Team don’t do things by halves – after all, why would you, say, shoot someone in the face when you can instead throw them out of a skyscraper to be caught by a helicopter and blown up later? It’s hard to isolate the most ridiculously OTT action set-piece, but the winner is probably the scene in which the guys’ massive plane gets blown up and they escape in a tank. A tank with parachutes. Except that the parachutes all get shot off by robot planes, so they have to steer the tank by firing the big guns all over the place whilst B.A. has a shit fit on the floor. It’s captivating, truly it is.

By and large, the main cast is great. The accents are a bit haywire – Liam Neeson is clearly Irish throughout, and Sharlto Copley sounds South African whether he’s trying to sound American or English – but both actors are superbly talented, and Bradley Cooper is none too shabby. Cagefighter Quinton ‘Rampage’ Jackson is mediocre, which is frankly better than I expected him to be, so all’s well there. Throughout the film, you’re aware that if the hi-octane madness slows down for more than 2 minutes at a time (just long enough for our four times hourly dose of character development) then the whole thing will fall on its collective arse, so it’s fortunate that it never does – it’s so busy and exciting and mad that you don’t really notice that it’s massively insubstantial tripe.

All power to the Team, I say. They didn’t have much to work with – George Peppard frantically mugging through a faceful of cigar is hardly an inspiring image – but they managed to turn a ridiculous and formulaic TV show into a film which isn’t actively worse than anything comparable on the market. It’s a shame that so many one-liners get lost in the flak, and I was particularly sorry not to see more made of Sharlto Copley’s extraordinary Murdock, but in general The A-Team is an uncomplicated thrill-ride of an action film which delivers its explosive payload with panache. Give it a whirl.