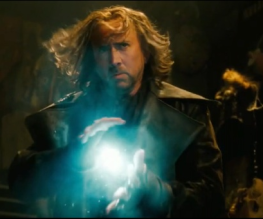 Taking inspiration from a segment of Walt Disney’s Fantasia, I prayed that The Sorcerer’s Apprentice would go gently on Mickey’s tale, which both thrilled and terrified me as a child. But besides a brief swirling of buckets and blast of the classic theme tune, the source material was scarcely detectable. The film succeeded in soaking up all the magic and intrigue of the original and threading it into a new and fully realised modern world.

Me and Merlin go way back

The action begins in 740AD with the ancient wizard, Merlin. He is betrayed by his apprentice, Horvath, whose alliance with a dangerous witch leads to the great sorcerer’s death. In an attempt to halt impending disaster, loyal apprentice Balthazar (Cage) captures the wicked magic-folk in a ‘Grimhold’, a Russian doll device that will bind them until the day it is opened. He vows to fulfill Merlin’s wish and go in search of the true successor.

Moving forward to modern day Manhattan, we meet ‘average’ school kid Dave (Jay Baruchel). Having stumbled into a mysterious antique shop, he is met by a somewhat dustier Balthazar, who instantly recognizes him as the ‘Prime Merlinian’. Chaos is unleashed when the clumsy brat tampers with the Grimhold, resulting in both Balthazar and Horvath being trapped in an urn.

Ten years on and the two wizards break free of the glorified plant pot to pursue their own personal vendettas. Dave, now a reclusive physics nerd, is their first port of call in a search for the Grimhold. With the help of Merlin’s enchanted ring, the teen reluctantly embarks upon a mission to protect mankind against the evil forces that Horvath plans to release. Will Dave’s science smarts be enough to save the day and win the heart of childhood sweetheart Becky? Well, what do you reckon?

Who needs a mop when you can use a Dyson?

The formulaic plot was one of only a handful of weaknesses. I must mention my inappropriate amusement as Dave thrust the magical ring at various villains, with a look of intense constipation. Could a more threatening or at least more manly object have been chosen to justify the drama of these moments? That aside, the film’s fusion of an ancient tale with a modern world was captivating. The energy with which the scenery had been created, notably in a colorful china town sequence, was a real visual and atmospheric draw. Strong performances by both Cage and Baruchel were key to the central Dumbledore and Potter-esque relationship.

While many have criticized the teenage romance subplot, I actually found it a welcome breather from all the hardcore wizarding palaver. Becky played a key role in representing Dave’s ‘normal’ college life, which he struggles to let go of in the face of his new calling. In a cleverly crafted script, the characters were aware of their own sappiness, which meant that I could forgive a few cringe-fests.

The film displayed intelligence with its creative ideas, such as a Dyson vacuum cleaner taking part in the famous walking mop scene. Horvath’s recruitment of a flamboyant entertainer was one of many farcical elements that had me laughing.

Kids in particular will love this tale, in which the geek finally finds a place where he can be the hero.