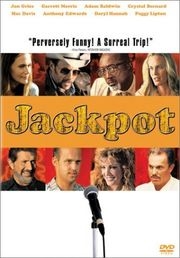 A good misty Scandinavian murder is what we all want these days. David Cameron loves telling us he loves The Killing (go and run the country, Dave), the BBC are making a fourth series of Wallander and Martin Scorsese is adapting Jo Nesbø ‘s The Snowman for the silver screen. Prime time, then, to be following the success of Headhunters with Jackpot, another Jo Nesbø book adaptation, this one written by the Norwegian author with the intention of becoming a film.

Scripted and directed by Magnus Martens (United) and set on the Norwegian/Swedish border, this is the story of Oscar Svendsen (Kyrre Hellum) who quietly runs a recycling plant that employs ex-cons. He and three of his nefarious employees win an accumulator bet and find themselves the recipients of 1.7 million kroner. And then This Shit Gets Real.

Told backwards, Oscar wakes up in a strip joint, under a dead hooker, clutching a shot gun and is promptly led off to be interrogated by Detective Solor (Henrik Mestad) for the suspected murder of eight people. He’s the only surviving member of the gang of four who won money the previous night, an incident which kicked off a ludicrous and bloody chain of events. The ‘thriller’ element of all this is that we’re supposed to not know whether he’s telling the truth; did things get horribly out of hand, or was this a calculated multiple homicide? 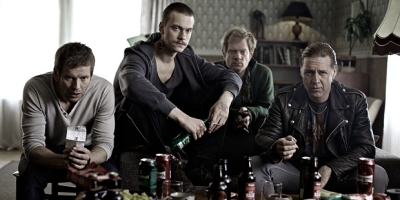 From the very first scene (an ambiguous shoot out in a sex shop) it’s clear that Martens fancies himself as something of a Nordic Tarantino. Twangy banjo music accompanies blood exploding in slow motion out of people’s chests, stress balls in the shape of boobs quiver quietly in a pool of entrails and we freeze on faces as their characters’ names come crashing, cartoon-style, onto the screen. Martens’ love of the Coen Brothers is also evident – there’s even a ‘tribute’ to the wood chipper scene in Fargo. ‘Cept when you’ve also commandeered their entire film-making style, that’s less a tribute and more sort of theft isn’t it.

What keeps you from feeling a bit passive-aggressive about such a flagrant rip-off is that the story really trots along and the acting is cracking, particularly Mestad as the detective. Perhaps it’s because I hadn’t read my blurb and I thought it was going to be a harrowing, gritty drama, but I was delightfully surprised by how much I laughed (it was ‘a lot’ in case you were wondering, and some of it was ‘out loud’). Aside from the fact that they’d just brutally killed a man with a hammer, the reactions of our recently rich leads were believably normal. ‘Yes’, you chuckle to yourself, ‘I imagine it is harder than you think to get a body out a window’. 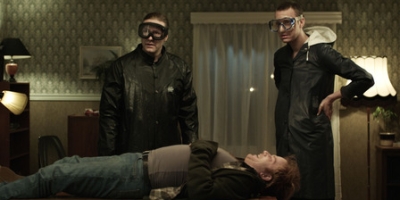 Unfortunately, Jackpot managed to lose itself a whole star overnight. I left high on laughing at severed limbs (I also had a bit of sunstroke) but the more time I had to dwell on the plot, the more apparent it was that some staggeringly sloppy detective work had gone on. The film sets itself up for a real stand-up-on-your-seat-and-applaud ending and then proceeds to really let itself down. It’s impossible to discuss the glaring plot holes without giving anything away, but know that they’re there, and they’re large. It doesn’t do itself justice as a thriller and it’s not going to blow you’re mind, but Jackpot is a genuinely entertaining piece of cinema. If you’re feeling up to both looking and reading, then you could do much worse than this jolly old blood-splattered romp.

Previous: Top 10 most underrated actors
Next: Diary of a Wimpy Kid: Dog Days