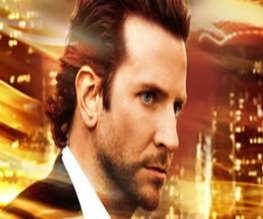 Based on the 2001 novel The Dark Fields by Alan Glynn, Limitless explores the human capacity for self-sabotage – with the added fun-factor of hallucinogens – through the character of Eddie Morra, played by Cooper.

As the proverbial struggling writer, Eddie (Cooper) happens upon a creative impasse, and divine intervention appears (as is so often the case) in the form of controlled substance; Eddie is offered a sample of a new drug by a connection from the past, and the dealer promises that by taking the pill, he will find the muse which has been eluding him. Eddie accepts and soon finds himself in the clutches of dependency and addiction to the drug’s effects, which transform him into an unstoppable superhuman; he writes a brilliant novel in four days, learns French and dazzles billionaire Carl Van Loon (De Niro) with his newly acquired talent for predicting the mercurial shifts in the Wall Street stock market. But as with any addiction, there are side-effects, and Eddie begins to lose both his hold on success – and the real world. What follows is the inevitable downward spiral, and the struggle to break – or keep – the habit.

The medicated metamorphosis of Eddie’s character manifests itself in a vast hyperreality of trippy camerawork, but the idea of a veritable recipe for grandeur is not an overblown one in this film – and the more serious commentary on the tentacled reach of the drug trade is voiced through both Cooper and De Niro’s superbly subtle delivery as the opposing voices on the subject. Limitless bizarrely parallels another film for which Cooper (undeservedly) received little attention – Midnight Meat Train (2008), based on Clive Barker’s book of the same name. In a similiar vein as Limitless, Cooper’s role in the critically unacclaimed film was that of a struggling photographer, whose ambitious hunger leads him into an obsessive pursuit of dark subject matter. But despite the thematic similiarity, there is one tragic difference between Cooper’s latest film and the Barker adaptation: while Midnight Meat Train leaves you feeling as though you should never have watched to the bitterly absurd end, Limitless leaves you wondering where the hell the end was. Ironically, in much the same way as Eddie Morra’s pumped-up brain makes synaptic connections, when the ‘clever’ twists within the story are revealed, they are done so at breakneck speed and are near-imperceptible. Blink and you’ll feel as though you’ve blacked out for an hour. And if you’re expecting that glorious moment of illumination that usually accompanies two hours’ worth of copious substance abuse, don’t. The film is one wild trip punctuated by an anticlimactic, cheesy comedown that leaves you wondering what it is that you missed.

Disappointingly, Limitless is pretty limited in its scope of exploration into the concept of human potential and its dangerous extents. There are so many uncharted directions the plot could have taken, and so many scenarios in which Cooper would have had the chance to show some grit, but the characteristic Hollywood soft-focus erodes the edgier take that would have made this film more than mediocre, and more relevant than frivolous. And while there is no doubt that Cooper was the right choice for the role, it’s just not as sure a thing that this was the right (if not different) choice for Cooper.

Previous: Juno Temple signed on for Batman 3
Next: Dracula and Jack the Ripper get ready to face-off