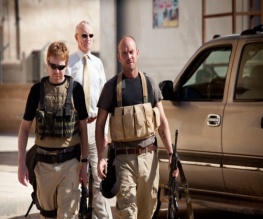 When best friend, and fellow security contractor, Frankie (John Bishop), is killed in suspicious circumstances, balding grump Fergus (Mark Womack) makes it his own personal mission to find out what really happened in Iraq. Now back home in Liverpool, Fergus enlists the help of his bessie mate’s distraught widow (Andrea Lowe), an Iraqi musician (Talib Hamafraj) and Skype to investigate the Private Military and the role its hierarchy might have played in his friend’s death. In possession of a mobile phone containing footage of Frankie’s squadron gunning down a civilian taxi, Fergus is soon fighting for survival against a company desperate to cover up the incident at any cost.

Route Irish, named after the deadliest stretch of road on the planet, connecting as it does the international zone and Baghdad International Airport, is the latest film from Ken Loach and writer Paul Laverty, fresh from the acclaim of their last feature together Looking For Eric. Having missed its début at Cannes (by about nine months and 1,396 miles), I caught Route Irish at the seventh annual Glasgow Film Festival, well aware of the buzz generated from the film’s late submission to the former festival, just two days before it began. It was with great disappointment, then, that Loach’s thesis on the privatisation of war proves so derivative in its handling. Effectively an unremarkable conspiracy thriller that jumps back and forth between Iraq and Liverpool, Route Irish pulls few punches in its unfortunately stagnant narrative, which plays like an uninspired mix of Death Wish, Green Zone and, by film’s end, a humourless Sexy Beast. Forgettable for all but a brutal portrait of water-boarding, the film is a collection of genre clichés that casts mannequins in the place of its antagonists and a shouty brute as its hero, relying on a laughably underdeveloped MacGuffin for the majority of its plot points. It is comedian John Bishop who makes the biggest impact as the doomed Frankie, a good guy whom bad things happen to who provides the only real character to his mercenary. Reduced to fleeting flashbacks and found footage, the rest of the characters bring a distracting inconsequentiality to proceedings as the audience is left to watch a revenge thriller unfold in which they have little investment. While Loach’s cause may be a deserving one, it is not done justice with a few raised voices, fisticuffs and explosives. In fact, had Loach dropped the narrative completely, the devastating archive footage alone would have proved a more emotive and dignified piece of propaganda.

A worthy subject matter lost in the spittle and insignificance of a Liverpudlian bar brawl, Route Irish is a disappointingly generic thriller that undermines its own cause by shooting first and asking questions later. Overplotted and under-scripted, Loach’s latest is as unexciting as its cinematography, the film’s bite as dulled as Chris Menges’ lens.

Previous: At the Mountains of Madness project axed
Next: Official Scream 4 Site Launches 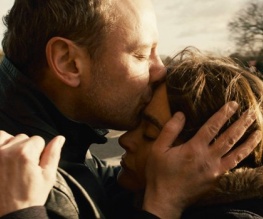