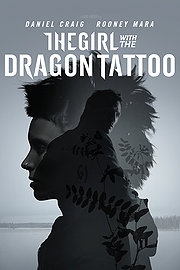 The opening credits of David Fincher’s Dragon Tattoo are probably the best thing about it. Not trying to ruin your viewing experience or anything, but the first five minutes – an astonishing CG sequence of molten, dripping metal that oozes around computer keyboards, into staring eyeballs; creating figures that rise, embrace and violently collapse, all to the shredding soundtrack of Trent Reznor and Atticus Ross’ take on Immigrant Song – is bloody marvellous. And it can’t help but make you wonder what this group of people could accomplish if not bound by Stieg Larsson’s rather clunky – if admittedly engaging – tale of Nazi psycho-murder rape-mongers.

So, for those who’ve managed to avoid this Girl and her accompanying body-art over the past few years, the premise goes thusly. Investigative journo Mikael Blomkvist (Craig) has found his career in tatters after being successfully sued for libel by a dude we’re pretty sure is Seriously Bad News. Deciding to leave the magazine he runs – as well as his co-editor and sometime lover Erika Berger (Robin Wright) – until the heat dies down, he takes on a rather unusual assignment based in a small Swedish island; there’s a man there who’s sure he has a mystery only Blomkvist can solve, and who’s willing to pay handsomely for his help. Henrik Vagner (Plummer), the retired founder of a multi-national corporation, is tortured by the memory of his grand-niece Harriet, missing these forty years. He’s determined that her murderer lies in his own family, on the island itself – it’s up to Blomkvist to open an investigation closed years ago, and to find the killer that no one else could.

Running parallel to this mystery is another one – this time in the shape of an ashen-faced girl by the name of Lisbeth Salander (Mara). Lean, ferociously intelligent and perpetually wary, Lisbeth works as a freelance hacker for a private detection agency, using her considerable talents to seek out information barred from anyone else. Dependent on government care due to some childhood trauma no-one – least of all Lisbeth herself – is willing to expose, her life so far has been a constant fight which, as we discover to devastating effect, she seems more than capable of winning. Watchful, shrewd, with a Goth wardrobe and a terse disinterest in almost everyone, Lisbeth nevertheless finds herself caught up in Harriet’s tale when she is assigned to Blomkvikt as an assistant researcher. “I want you to help me catch a killer of women”, says Blomkvist at their first meeting. Lisbeth’s eyes, usually glowering and cast down, look up, and it’s clear that he has hit upon a subject Lisbeth is willing to give everything to. And it turns out her everything is rather a lot. Ignore any reports that tell you this film is any easier-going than Niels Arden Oplev’s Swedish adaptation – if anything Fincher’s directorial gaze is even less relenting. Harsh, impatient cuts between scenes, minimal dialogue and the cruel, snow-covered setting mean that this Dragon Tattoo feels far more intimate then Oplev’s, every emotion heightened, every exchange distilled. Both Blomkvist and Salander’s personal battles are expressed in exquisite, painful detail, and it’s impossible not to feel every tiny dart. From Mikael’s bone-aching frustration at his pen failing in the freezing Swiss temperatures to the bruises Lisbeth washes delicately after a horrendous encounter with her guardian, Fincher’s delicate rawness permeates every frame, keeping us firmly in hand even as the plot spirals a little out of control.

His canny choice to focus far more on Lisbeth and Mikael’s relationship rather than the surrounding characters means that our focus is always the dynamic between the two of them; both Fincher’s direction and Steve Zaillian’s script twist their exchanges into far more interesting territory than the novel does. The downside of this, of course, is that the central mystery is pushed somewhat to the side, with the solving of the (fairly silly) murder mystery seeming more of an annoyance to be dealt with than the pulsing heart of the plot. Even the ending – a heist sequence worthy of Mission Impossible: Ghost Rachmaninov – seems like a burden to be carried, disrupting the narrative arc in a way that seems unnecessary and strange. It’s not their fault, of course, these things are built into the lumpy narrative of The Girl With The Dragon Tattoo and are shown with style, sex and razor-sharp tension; it’s just a shame that Fincher and Zaillian are forced to grapple against the story, rather than run with it. Still, this film belongs to Rooney Mara, and her quietly explosive performance as Lisbeth Salander will certainly ensure we line up for the next instalment, plot-grumbles or no. Her Lisbeth is leaner, angrier but also at moments softer than the source material would have her; a hypnotic mix of shrewish disdain and sudden, almost desperate affection that is impossible to forget. I find it difficult to believe that anyone will walk away from The Girl With The Dragon Tattoo entirely satisfied, but there’s no denying Fincher et al have given it everything they’ve got.