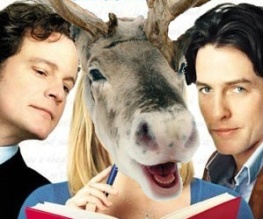 Garry Marshall’s festive offering has delighted filmgoers with its charming portrayal of Lapland’s most lovable, neurotic and dumpy thirty-something single reindeer, Blitzen Jones. .Were you to unravel the film reels of Love Actually and Pretty Woman, mesh them together and digitally re-master them with chunks of a David Attenborough documentary sprinkled on top, Blitzen Jones’s Diary would be the secret lovechild of this artistic conglomeration. Accompanied by a delightful storyline and a dazzling cast, the mastery of this film is the way Marshall (Pretty Woman, Beaches, Valentine’s Day) juxtaposes the comedic depiction of Blitzen Jones’s battle through singledom (epitomized by her chronic bouts of pre-menstrual antler irritation) with the darker, more poignant undertones of her struggles. Critics were skeptical of Helena Bonham-Carter’s ability to master the guttural inflections of Blitzen’s traditional Laplandish accent, however there can be no doubt that she steals the show (although, we’re still not sure about full facial-fur on a woman). Packed with festive cheer, Blitzen Jones is a true cinematic Christmas cracker.

Blitzen Jones is a Barren-Ground Caribou reindeer famous for the extremely large M&S pants she wears around her four-chambered stomach. Blitzen’s mother is keen to see her daughter married off, yet this year’s annual mating season has not gone well, generating only three disastrous dates and a rash across Blitzen’s rear legs. Depressed by her failure in the mating stakes Blitzen piles on the pounds, suffering from severe swollen hooves in the process. Bonham-Carter captures the ruminant nature of the breed in convincing manner, with Blitzen’s incessant digestion (and re-digestion) of grasses, sedges and willows played out with a knowing look of resignation. Soon comes Blitzen’s impassioned statement that, finally, this will be the year where she will become the lady of every stag’s affections. Blitzen’s declaration of impending goddess-reindeer-status culminates with a rousing rendition of Elton John and Kiki Dee’s “Don’t Go Breaking My Hooves” at the office Christmas party, in a magical soundtrack recorded by Susan Boyle. Blitzen’s diary tracks her transformation, describing her pursuit of Lapland’s most eligible reindeer, Rudolph Darcy (Orlando Bloom), a Queen Charlotte Islands Caribou with a penchant for cashmere and jurisprudence textbooks, whilst documenting her daily intake of cigarettes, Chardonnay and bird eggs.

Clearly too frumpy a mammal for a fine stag like Rudolph Darcy, Blitzen unwittingly falls for the caddish charms of Dancer Cleaver (Ed Westwick), notorious for working his charm on numerous reindeer in the same mating season. It’s a tried and tested formula of a big fat love triangle, yet the mundaneness of the plot is made unimportant by Marshall’s artistic direction. Some of the witty analogous nods to human traits are genius, none more so than when Blitzen dreams of having “a stonking pair of antlers: large, firm, both the same size and, crucially, standing up well to the dangers of gravity”.

The dénouement is a little cheesy – cue a predictable blast of “It’s Raining Stags” and a literal locking of antlers as Dancer and Rudolph end up fighting it out for Blitzen’s affections. Altogether, though, this is a genial offering for the yuletide season. Comparable perhaps to finding a fleece-lined pair of cashmere socks in your Christmas stocking – at first glimpse it seems like a predictable offering, but my goodness it’ll feel nice on a cold winter’s day.

Back To Write Christmas