SHORTLIST: Snakes On A Sleigh 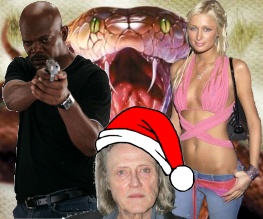 The film largely unfolds on Santa’s sled, where a shocking truth is uncovered: Santa’s sacks are full of snakes, leaving Christmas in jeopardy. The world’s kids expect Bratz dolls and Wiis and Harry Potter DVDs for Christmas, not bits of dried-up snakeskin, or a python bite to the face.

Who put the snakes there? Was it the elves, who have been taking industrial action to protest against the wage cuts Santa (Walken) has been making in the recession? Or is one of Santa’s murky underworld contacts to blame? It seems Santa’s been topping up his own wage with some decidedly shady dealings and now he’s in way over his beardy head.

Santa’s fate, and that of the world’s parents, who will otherwise have to spend Christmas day comforting their whingeing kids instead of snoozing in front of the TV, appears to lie in the hands of Paris Hilton. She’s onboard Santa’s sleigh filming a special Christmas edition of her TV series My New BFF – in My New Christmas BFF, Paris will make friends with the person who buys her the biggest Christmas present.

Unfortunately, Paris is so angry at the prospect of not getting any presents at all, she sets her handbag dog on Santa. As Samuel L. Jackson turns up in a long coat, shouting about snakes and threatening to kill people, and Santa nurses his bitten knees, it seems Christmas could be ruined forever. Can Santa persuade Paris to allow her film crew to stop holding her shopping bags so they can help save Christmas? Will Samuel L. Jackson take his coat off? And will the elves reach a collective agreement and stop picketing people’s chimneys?

Tarantino’s ultra-violent, blood-soaked tale almost didn’t get made at all. This was partly because the director found some scenes too upsetting to write – in one sequence dropped from an early draft of the script, Santa Claus punched a reindeer in the face before pawning all the world’s Christmas presents – and also due to the fact that Paris Hilton refused to work with the reindeer after one of them shat in her handbag.

It’s a searing criticism of today’s consumer culture and a shockingly violent ode to the same B-movie horrors that inspired Death Proof, Tarantino’s contribution to the Grindhuse double bill. It’s also by no means an easy watch, and indeed you may be overwhelmed by the desire to goad a fellow cinema-goer into punching you in the head, just so you don’t have to watch it until the end. But Quentin Tarantino directed it, so obviously you’re not cool unless you’ve watched it, analysed the script for pop-culture references and hung the poster in your bathroom. Off you trot.

Previous: Avatar is most pirated film of 2010
Next: SHORTLIST: Jihad All The Way