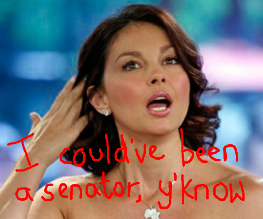 Ashley Judd will join the cast of “future-dystopian-romance-malarky” Divergent, as the world tries to forget that she almost ran for Senator of Kentucky. Although no political ambitions from any actor will rival the absurdity of The Governator, we think we prefer Ashley Judd on the silver screen, where she so rightly belongs.

Ashley Judd has nabbed the role of absurdly attractive mother to awkwardly-named Shailene Woodley, who plays the central role of Beatrice Prior. In a world where humanity has segregated itself into factions based on personality traits (???), Beatrice has decided she has had enough of being “LABELLED” and “JUDGED” and that she’s “TOO COOL” for the totalitarian state, preferring instead to hang out with boys. Take THAT, society!

Dear Lord. Quite what function this societal structure serves is beyond us, but then again we’re just ignorant rubes typing meaningless words into a magic box that puts stuff on the internet, so dystopic dynamics go right over our heads.

Ashley Judd should have plenty to do in Divergent, whether it being married to Aaron Eckhart (beefcake) or bemoaning the eccentricities of her wayward daughter.

Expect to see Neil Burger‘s retelling of the Rosa Parks story, except set in the future and with a bunch of shrill white people instead, sometime in 2014. Glad to have you back, Ashley Judd!

Would you prefer Ashley Judd as an actress or a politician? Let us know in the comments below!