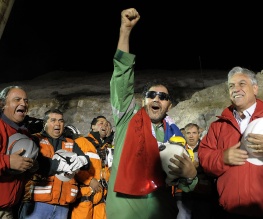 The Olympics are over. There it is. We said it. The sad, horrible truth. They’re gone. Over. Finito. The outpouring of national pride and the uncharacteristic good-mood cloud that hung over the UK for the summer is dissipating like the smiles at a Christmas dinner when people begin to remember why they don’t talk to their family for the other 364 days a year.

Where are we going to get our fix of triumph over adversity; our dose of the incredible human spirit? Well, we have the answer, and it comes in the unlikely form of 33 Chilean miners.

Where this summer was dominated by the Olympics, two years ago a story unfolded that captured the world in a very similar manner. The incredible tale of 33 Chilean miners, trapped 700 metres underground by a cave-in, only to emerge astonishingly unscathed 69 days later, is the sort of story you wouldn’t believe was real, had it not been the subject of round-the-clock rolling news coverage. And, of course, with a story that good, somebody was always going to film it.

That somebody is going to be Patricia Riggen, director of Mexican-American drama La Misma Luna (Under The Same Moon), and Eva Mendes vehicle Girl In Progress. Titled The 33, Riggen is ensuring authenticity by visiting each of the miners themselves, to hear their stories first-hand and ensure that the film depiction rings true.

The film will be shot in Chile, but scripted in English. We doubt they were really speaking English down there, but we’re willing to forgive them for the sake of marketing. At any rate, it should be a damn sight more realistic than the 3000 cops being trapped underground for months in The Dark Knight Rises (not that you’d tell from their condition; Hell, they’re fit enough to go to war moments after their escape!) No such dramatics from the 33, but it will doubtless have plenty to tell us about the human spirit, probably showcasing the best and worst of humanity in the microcosm of the 33 over those 69 days.

With production due to begin any day now, we can expect The 33 to emerge blinking into the daylight sometime in the latter half of 2013.