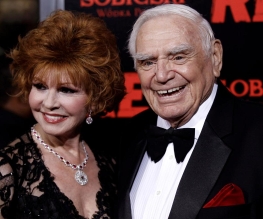 ‘Tis the season it seems, for the great and the good of the silver screen to quietly take their final bow and turn off the dressing rooms lights. Oscar-winning actor Ernest Borgnine was welcomed to the great wrap party in the sky yesterday, when he died of kidney failure at the age of 95, surrounded by close family.

Borgnine won his Academy Award in 1955 for his portrayal of a love-deprived butcher in Marty and continued to make films for the next six decades at a rate of nearly three films a year. His final film The Man Who Shook The Hand Of Vicente Fernandez was finished in 2011 and is set for release this year.

Born in Connecticut in 1917 to Italian parents, Borgnine joined the US Navy during the Second World War and served there until 1945. Unwilling to take a factory job when he left, he decided to give the stage a try and found himself a natural, getting his first big film break with From Here to Eternity in 1953. He went on to play Quinton McHale in McHale’s Navy, co-starred in the 80s action series Airwolf, received an Emmy at 92 for his role in ER and voiced Mermaid Man in SpongeBob SqaurePants.

Previous: Dinosaurs vs Aliens Trailer Released
Next: Expendables 2 is not only a real film, but has a poster