First trailer for The Three Musketeers is properly, properly shit 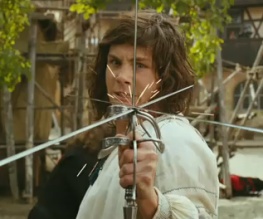 Listen up; we bloody love The Three Musketeers. We do. We loved the book, we loved the utterly mental 1973 adaptation with Oliver Reed, and we still can’t watch The Man In The Iron Mask without sitting on a folded towel. Magnificent valour! Yet we simply could not be more unhappy about the first trailer for Paul WS Anderson’s new 3D adaptation of the iconic novel. Could. Not.

Listen, Paul WS Anderson. We know you love adapting video games (after all, DOA, Mortal Kombat and the Resident Evil series have all suffered your greasy pawprints) but The Three Musketeers is off limits. That tripe looks like nothing so much as a trailer for Assassin’s Creed – hooded figures jumping off frankly dangerous roofs, CGI shots of Venice mid-carnival, suspicious ninja types with fucking stupid crossbows – and just to add insult to injury, there’s an airship in it. An AIRSHIP. We’ve previously discussed the problem of putting airships in a film set in the SEVENTEENTH CENTURY (alongside the problem of putting Orlando Bloom in anything at all), but he actually seems like the least offensive part of this trailer; the most offensive, since you’re asking, is the spectacle of Cardinal Richelieu, a venerable priest, FUCKING FENCING. We also appear to see Constance Bonacieux indulging in some slow-motion acrobatic sword-time shit, which is frankly insulting to all concerned.

Ladies DO NOT jump like that. Also, Matthew Macfadyen, you are definitely – definitely, mind – not Jeremy Irons. You’re not Colin Firth either, just for the record. What you are is a horrible thespian leech piggybacking on the performances of significantly more talented actors. It doesn’t seem worth wasting any words on the other two goons; we’re going to go and read The Viscount de Bragelonne in a corner, and sob.