Gangster Squad gets a full trailer 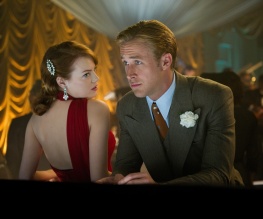 Gangster Squad has gotten its first full-length trailer, and all of a sudden we can’t wait to see it! Gangster Squad is a crime film, set in the mob-dominated 40s and 50s, concerned with the forming of the titular squad who set out to take down crime-lord Micky Cohen. Based on a true story, the squad is formed of Los Angeles detectives, who are apparently given free-range to circumnavigate the law in the aim of taking back the city.

Starring Sean Penn as mob-boss Cohen, and Ryan Gosling and Josh Brolin as the men leading the crusade to take him down, the cast already looks solid. And when you factor in Nick Nolte‘s grizzled police chief (the character may not be grizzled, but everyone becomes grizzled when played by Nick Nolte), and Emma Stone – whose slinky demeanor and husky voice make her a perfect fit for a glamorous 1940s seductress – then you’ve got some serious talent involved.

The trailer looks like barrels of fun. The classy cast are giving it their all, but this is no po-faced true-life tale – director Ruben Fleischer seems to have imbued this with the same sense of kinetic fun that he gave to previous effort Zombieland, and the style is simply pouring off the screen. The look and feel of Gangster Squad is spot on, and seems to indicate a loving fedora-tip to the past-classics of the genre (note the bit set in Chinatown), whilst also injecting a distinctly 2012 flavour to proceedings (note the very modern soundtrack).

The film was initially slated to be released in the US in September, but was pushed back after the Aurora Cinema shootings, seeing as Gangster Squad coincidentally features a scene where characters fire off sub-machine guns from behind a movie screen, into the audience of a cinema. With such uncanny similarities to the real-life incident earlier this year, we can understand the decision. However, the scene is apparently quite a key part of the film, so whether it’s going to be re-shot, relocated or scrapped altogether remains to be seen, but the pushed release date now sits at January 11th 2013.

While the crime-genre is distinctly masculine in nature, with Ryan Gosling playing a cooler-than-thou anti-hero, expect the ladies to be flocking to this one as readily as the men.

Previous: Sylvester Stallone and Robert De Niro team up
Next: Jodie Foster moves on from The Beaver